Democrats Call for Focus on Narrative, White Voters After 2014 Losses

The Democratic Party’s autopsy of its devastating defeat in 2014 calls for a renewed focus on the party’s message and winning back white Southern voters.

In preliminary findings unveiled Saturday at a meeting of the Democratic National Committee, a task force studied the party’s defeats in 2010 and 2014—despite its victories in the 2008 and 2012 presidential years. It called for the creation of a “National Narrative Project” to help the party develop a message that can survive in midterm election years.

“This morning we’re going to hear some tough love, and frankly we need to hear it,” said Florida Rep. Debbie Wasserman Schultz, who chairs the DNC.

“It is strongly believed that the Democratic Party is loosely understood as a long list of policy statements and not as people with a common set of core values (fairness, equality, opportunity),” the report found. “This lack of cohesive narrative impedes the party’s ability to develop and maintain a lifelong dialogue and partnership with voters.”

The report, developed by party leaders and operatives, encourages Democrats to develop a three-cycle plan to increase representation in state legislatures for the purposes of the 2020 redistricting cycle. Republican gains in states in 2010 led to gerrymandering in their favor in the last decennial redrawing of congressional district lines, and further gains in 2014 made the Democrats’ challenge to reverse the trend all the greater.

“The Task Force recommends that the DNC—along with the Democratic family of organizations, state parties and allied organizations—create and resource a three-cycle plan that targets and wins back legislative chambers in order to prepare for redistricting efforts,” the document states.

The report also calls on the party to continue pushing for right-to-vote legislation, as well as step up efforts nationwide to recruit candidates at local and state levels to build the next generation of party leaders. Additionally, it calls on the party to continue to study why voters drop-off from presidential years to midterm elections, resulting in a more favorable playing field for the GOP, as well as ways to prevent the hemorrhaging of white voters .

“In order to win elections, the Democratic Party must reclaim voters that we’ve lost including white Southern voters,” the report states. The topic was a subject of discussion Thursday during a meeting of state party chairs, led by South Carolina Democratic Party Chairman Jaime Harrison. On Saturday, Kentucky Gov. Steve Beshear, who chaired the task force, faulted the party for having “a single-minded electoral strategy” focused on White house and said, “the Democratic Party has lost its way.”

“The first step toward fixing a problem is admitting that you have one, but it’s clear the DNC isn’t willing to come to terms with why their party lost in historic fashion last November,” Republican National Committee spokesman Michael Short said in a statement. “The reality is their divisive message doesn’t resonate and their liberal policies don’t work. And after years of neglect from President Obama, his chosen heir Hillary Clinton will be inheriting a cash-strapped national party teetering on the edge of complete irrelevancy.”

The full report is due to be release in May. 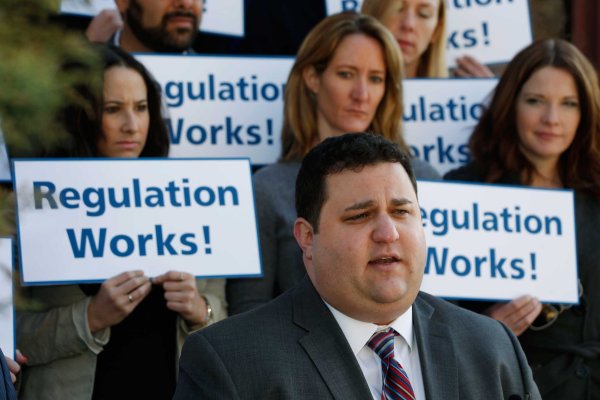 New Fronts Open in the Marijuana Wars
Next Up: Editor's Pick