Bitter cold gripped the eastern United States from Michigan to Florida on Friday, causing at least 24 fatalities ahead of a weekend forecast to bring more winter storms to regions still digging out of the snow.

Cities including Philadelphia, Washington, D.C., and Lexington, Ky., had their coldest morning on Friday in two decades, while the mercury in Flint, Mich. dropped to 25 degrees below-zero. Chicago registered its coldest temperature ever at -8 degrees Fahrenheit at O’Hare airport. As far south as normally sultry Orlando, temperatures hit 33 degrees, tying a previous 1958 record, the Orlando Sentinel reports.

Overall, at least 500 daily record lows have been broken since Sunday, Weather.com reports, with more expected Saturday morning in the Northeast.

The freeze has so far caused at least two dozen deaths across the country, mostly as a result of hypothermia or car accidents on icy roads, NBC reports. Seventeen of the deaths occurred in Tennessee, at least eight due to hypothermia. At least six people in Pennsylvania have died of hypothermia.

“This week ranks among the most intense arctic outbreaks so far in the 21st century for the eastern U.S., and it is certainly one of the most impressively cold air masses we’ve seen this late in the winter season, coming only a month before the spring equinox,” said Weather.com senior meteorologist Nick Wiltgen.

More frigid cold is expected across the region on Saturday, with sleet and freezing rain expected Friday night in Arkansas, and in Tennessee and Kentucky on Saturday. Three to six inches of snow will fall in Pennsylvania, New York and New England, and a foot or more is expected in parts of West Virginia and Virginia.

On Friday, temperatures Lynchburg, Va. dropped to -11 degrees, to -17 in Cleveland, and Washington D.C., hit 5 degrees. The acute cold is the result of an Arctic airmass plunging south from Canada, according to the National Weather Service. 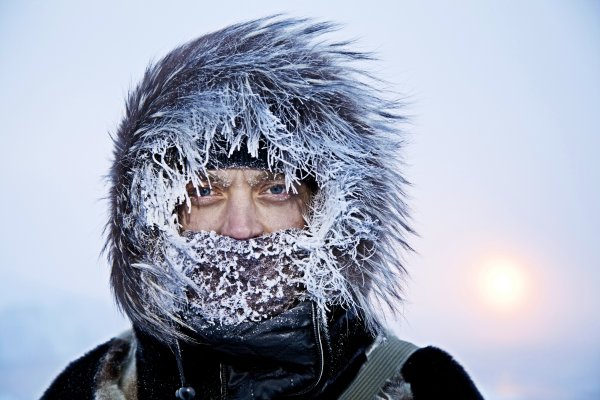 7 Reasons to Love This Freezing Weather
Next Up: Editor's Pick