Mason Tvert, spokesperson for the Marijuana Policy Project, talks during a news conference in reaction to the announcement that a federal lawsuit is being filed on behalf of two Colorado citizens by a Washington D.C.-based group to shut down the state's $700-million-a-year marijuana industry, Feb. 19, 2015, in Denver.
David Zalubowski—AP
By Katy Steinmetz

The fight over marijuana has moved to Capitol Hill — and the courtroom.

On Feb. 20, Colorado Rep. Jared Polis and Oregon Rep. Earl Blumenauer introduced bills in Congress that would legalize and tax marijuana on a federal level. “Over the past year, Colorado has demonstrated that regulating marijuana like alcohol takes money away from criminals and cartels, grows our economy, and keeps marijuana out of the hands of children,” Polis said in a statement. Both lawmakers are from states where residents have already voted to legalize recreational bud, along with Alaska, Washington and Washington, D.C.

The Regulate Marijuana Like Alcohol Act would remove marijuana from the federal government’s schedule of illegal drugs and transition marijuana oversight to the Bureau of Alcohol, Tobacco, Firearms and Explosives. The Marijuana Tax Revenue Act would impose new taxes on the sale of recreational marijuana, starting at 10% and rising to 25% over time, as well as occupational taxes of marijuana businesses.

But the draw of revenue is unlikely to inspire Republican-controlled Congress to take up the bills. According to Gallup, a slim majority of Americans, 51%, favor legalizing weed, but less than a third of conservatives do. And similar bills, though branded differently, have gone nowhere in Congress.

In February, the final tallies for sales figures in Colorado came out: stores and dispensaries sold nearly $700 million worth of legal medical and recreational marijuana in 2014, the first full year when legal sales of recreational marijuana existed anywhere in the world. In the month of December, the state made an estimated $8.5 million in marijuana-related taxes, licenses and fees.

In his press release announcing the legislation, Polis acknowledged that the federal prohibition of marijuana puts players in the new legal markets at risk. “[S]mall business owners, medical marijuana patients and others who follow state laws still live with the fear that a new administration—or this one—could reverse course and turn them into criminals,” he said.

That’s no abstract argument, either. Opponents of marijuana legalization have already turned to the courts.

Polis and Blumenauer made their announcement a day after two federal lawsuits were filed in Colorado that aim to “end the sale of recreational marijuana in this state,” as one of the plaintiff’s lawyers said at a press conference. Both suits claim that legal marijuana shops are causing nuisances that puts them in violation of federal anti-racketeering laws, claiming that all players in state-legalized pot enterprises are de facto racketeers.

In one suit, a couple joined by the Safe Street Alliance—a D.C.-based group that opposes legalization—claims that the building of a marijuana cultivation facility next to their vacation home is obscuring “sweeping mountain vistas that include views of Pike’s Peak” that has made the property less suitable to hiking and horseback riding. In the other suit, a Holiday Inn in Frisco, Colo., is claiming that the planned opening of a marijuana shop nearby is already hurting their business, driving away families who won’t book there anymore.

These come after the states of Nebraska and Oklahoma asked the Supreme Court to strike down Colorado’s legalization law in December, claiming that sales of marijuana in the neighboring state are undermining their own bans on marijuana, costing them money and making more work for their law enforcement officers. The Colorado Attorney General said that case, which is ongoing, is “without merit.”

Morgan Fox, a spokesman for the Marijuana Policy Project, calls the two new suits “fairly frivolous” and the complaints “flimsy.” Marijuana law expert Sam Kamin, a law professor at the University of Denver suggested that the suits had flaws in comments made to the Denver Post, saying that the businesses the plaintiffs are objecting to aren’t even operating yet—and that being angered by obscured views might not be enough of a legal nuisance to stand on. “You have to show that your business or property interest were harmed by a corrupt organization,” Kamin told the Post. “Displeasure is not good enough.” Christian Sederberg, a Colorado lawyer dedicated to working with marijuana businesses, says that the suits appear to have a “a real challenge in terms of showing actual injuries.”

While there’s still no clear winner in the battle over legalizing weed, advocates for the cause are moving apace. In recent weeks, they’ve helped push several state bills to decriminalize or legalize marijuana in places from Texas to Vermont. In response to the Holiday Inn lawsuit, MPP began a Change.org petition on Friday, calling on people to boycott the entire hotel chain until the lawsuit is dropped. In 13 hours, the petition gained more than 5,000 signatures. 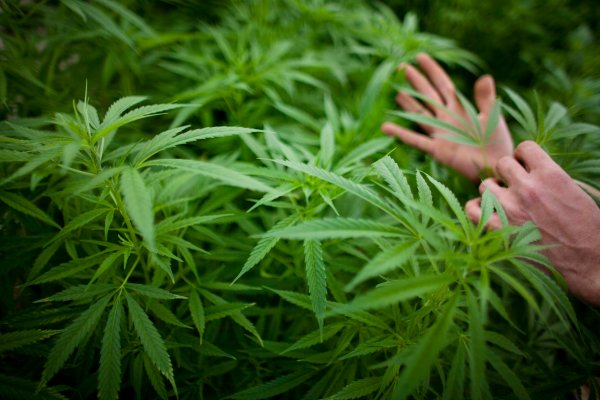 Oregon Colleges Brace for Legal Pot
Next Up: Editor's Pick