It’s only been two years since Madonna joined Instagram, but what a ride it’s been. Despite Madge’s late entry to the social media party, she’s wasted no time making her mark.

From her indelible Instagram debut to several controversies to her recent forays into apps like Snapchat and Grindr, here’s Madonna’s most memorable social media moments.

Early in 2014, Madonna posted a pic of her then-13-year-old son Rocco holding a bottle of booze with the caption, “The party has just begun! Bring it! 2014!” Plenty of haters (and some fans) took umbrage with a photo that implied underage drinking, to which she assured them, “No one was drinking we were just having fun! Calm down and get a sense of humor!”

Not long after that, Madonna posted a picture of Rocco boxing with the caption: “No one messes with Dirty Soap! Mama said knock you out! #Disn–ga.” Obviously, people took umbrage with her using the n-word to describe someone, much less her white 13-year-old son. Madonna later deleted this one.

Madonna posted photos and footage of a trip to Malawi, where she visited with some of the children who have benefitted from her Raising Malawi charity. Here’s Madge getting down with some kids to James Brown’s “Say It Loud – I’m Black and I’m Proud.”

Locking Down the Leak

When numerous tracks from Madonna’s forthcoming album Rebel Heart leaked back in December, the pop queen vented her frustration on Instagram and thanked fans for “not listening” to the leaks. “They are unfinished demos stolen long ago and not ready to be presented to the world,” she wrote.

While public sympathy was on her side after the massive demo leak, some were outraged when Madonna incorporated doctored images of Martin Luther King Jr. and Nelson Mandela into her Rebel Heart promotional campaign. While Madonna clarified she hadn’t meant to compare herself to either activist and apologized, she nevertheless kept the images up.

Madonna’s “Living for Love” became the first-ever music video to premeire on Snapchat, an app primarily used by teens for sending provocative self-deleting pics to each other. If Snapchat has a future in music, Madonna was in on the ground floor.

In a nod to new forms of social media and her extensive gay following, Madonna recently teamed with the gay dating app Grindr. Anyone who changes their profile pic to a recreation of her album cover (but starring yourself instead of Madonna) has the chance to be one of five fans who will get to chat with Madonna over Grindr on Valentine’s Day. Details here! 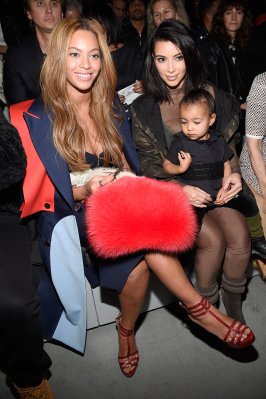 Kanye West Says Beyoncé Is Inspired By Kim Kardashian
Next Up: Editor's Pick