The Best and Worst Foods to Eat When You're Sick

Danny Kim for TIME
By Health.com

When you’re under the weather, the last thing you want is to eat something that makes you feel worse. But what if the last thing you want is chicken soup or crackers, and you’re craving ice cream or a glass of wine? It depends on what’s wrong with you, experts say. Here are common symptoms and expert suggestions on foods that help—and hinder—relief.

You’ve got the runs

For diarrhea caused by a stomach virus or a meal that didn’t agree with you, try the BRAT diet, says James Lee, MD, gastroenterologist with St. Joseph Hospital in Orange, Calif. “Many different things can cause diarrhea, such as Crohn’s disease or colitis,” he says, so see your doctor if symptoms continue for longer than two weeks or sooner if signs of dehydration appear, or if diarrhea is accompanied by fever, blood, severe pain, or severe nausea and vomiting.

Worst foods: Sugarless candy and gum containing sorbitol or other artificial sweeteners, which aren’t digestible and can trigger diarrhea. Other foods that can cause gas and bloating include onions, apples, broccoli, cabbages, and beans. Dairy may also aggravate diarrhea, as well as alcohol and caffeine.

Constipation can occur when not eating enough fiber-rich whole grains, fruits, and veggies, which stimulate digestion. “Adults need between 25 and 30 grams of fiber a day,” says Dr. Lee.

Feeling queasy makes all foods sound unappealing, but the right ones can ease symptoms by calming stomach acids, says Dr. Lee. “In general, keep food portions small and odors to a minimum.”

It hurts to swallow

When you have a sore throat, several foods can coat your throat and soothe the pain, says Lauren Slayton, RD, founder of Foodtrainers.com and author of The Little Book of Thin (Perigee 2014).

Worst foods: Avoid hot liquids and hard, scratchy foods such as potato chips, nuts, and granola. The acidic juices from raw fruits and vegetables, as well as orange juice, grape juice, and lemonade can also irritate a sore throat.

Dehydration is one of the leading causes of headaches, says Dr. Arthur, so it’s best to treat that cause first and see if it relieves your pain.

Best foods: Water and other fluids are your best bet. “Drink a bottle of water and wait 20 minutes to see if you feel better,” says Dr. Arthur. Caffeine is known for drying you out, but ironically, it can help in small doses. “But for each cup of tea or coffee, drink an equal amount of water to avoid dehydration,” Dr. Arthur says.

You have an earache

Earaches typically accompany other symptoms, says Dr. Arthur, “so they’re not correlated with any food in general.” Since they occur most often with upper respiratory infections, however, foods that clear up congestion can help earaches as well.

Worst foods: Dairy can thicken phlegm and worsen congestion, with the exception of yogurt, which contains probiotics, says Dr. Arthur. “Stay away from processed and packaged foods, too, which increase inflammation and lengthen the recovery process.”

A rash could be a symptom of an allergy, says Dr. Arthur. “Keep a detailed food journal to look for links to foods that seem to trigger a rash.”

Best foods: Omega-3 containing foods such as fatty fish (salmon, sardines) and walnut and flax seed oils, as well as foods high in protein are all important for skin health, says Dr. Arthur. “Skin is made up of proteins, so a diet adequate in protein is necessary for skin protein synthesis.”

Read more: 20 Things You Should Throw Away for Better Health

You have a runny nose

When you have a cold, the worst symptom might be a nose that just won’t stop running. Aside from taking a steamy shower, Slayton suggests drinking warm tea—it may not slow down the drip, but a soothing tea will make you feel better.

Best foods: Try Wakaya ginger tea, suggests Slayton. Ginger contains antioxidant and anti-inflammatory properties that may help clear up a cold faster than just waiting it out. “Apple cider and lemon in water works well, too,” she says.

Worst foods: Spicy foods can cause an immediate runny nose (which then turns into congestion), as may alcohol.

A cold, flu or sinus infection can irritate and inflame blood vessels in your nose, making it hard to breathe. Aside from inhaling steam from a hot shower or using a humidifier, if you’re stopped up due to mucous, some foods can help.

Best foods: Slayton recommends “golden milk,” which includes turmeric, a spice known for its anti-inflammatory properties. Place 2 cups of coconut or almond milk in a saucepan with 1 tsp dried turmeric, 1 tsp dried ginger, a dash of black pepper and honey to taste. Bring to a simmer, allow to sit for 10 minutes and serve warm.

Worst foods: Skip dairy, spicy foods, and sugar, all of which can aggravate symptoms, says Slayton. 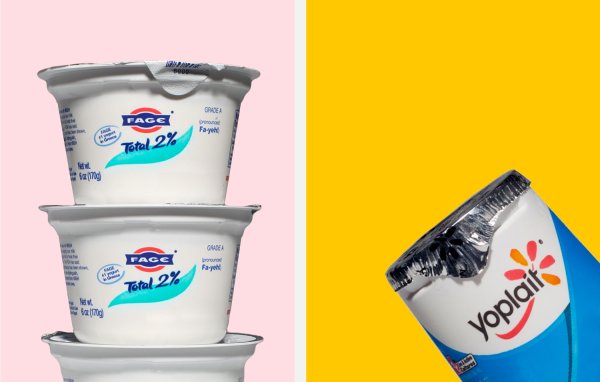 How People Around the World Eat Their Yogurt
Next Up: Editor's Pick