A general view shows damaged buildings along a deserted street and an area controlled by forces loyal to Syria's President Bashar Assad, as seen from a rebel-controlled area at the Bab al-Nasr frontline in Aleppo, Feb. 10, 2015.
Hosam Katan—Reuters
By Rebecca Collard / Beirut

Much of the Syrian city of Aleppo is little more than rubble, damaged by the intense fighting between rebel and government forces over the last four years. The city’s homes, factories and infrastructure have been destroyed by mortars and air strikes.

So when the Syrian government promised to halt its air bombardment of Aleppo as part of a UN-brokered ceasefire agreement, rebel forces might have been expected to rejoice. But instead, opposition forces are skeptical about the ceasefire — saying it will only shift the battlefront, and not end the war or decrease the violence.

“Why should the people of Idlib die and the people of Aleppo live?” asks Louay Al Mokdad, a former spokesperson for the Free Syrian Army, the western-backed rebels fighting Assad’s forces. Al Mokdad says a government commitment to stop air strikes in Aleppo would only mean Assad diverting his war planes to other Syrian cities.

The plan masterminded by Staffan de Mistura, UN Special Envoy for Syria, includes a U.N.-monitored “freeze zone” for the city that once had 2 million residents and is now one of the most hostile fronts of the Syrian war, where opposition rebels battle both government forces and fighters from the Islamic State of Iraq and Syria (ISIS).

The goal of the “freeze zone” will be to calm the violence and allow humanitarian access to the area. But even as de Mistrura announced that Syrian President Bashar Al-Assad is willing to commit to a six-week ceasefire, government forces clashed with rebels around Aleppo.

Opposition forces say the Syrian regime has no interest in ending hostilities. “This will just allow the regime to send its forces to fight another place, rebuild and bring in more [Shiite] militias to support them,” says Al Mokdad.

In other parts of the country, local rebel groups have signed ceasefires with government forces—but analysts and opposition leaders say these are usually agreed under duress, making them more like surrender agreements than ceasefires. While this has provided some relief for civilian populations in those areas, military forces have been shifted to other frontlines, not taken off the battlefield.

“Ceasefires are part of the regime’s military strategy,” says Noah Bonsey, the International Crisis Group’s Senior Analyst on Syria. “When the regime has reached these agreements–generally on terms favorable to it–it is then free to re-deploy its forces elsewhere.”

This has further incentivized the regime’s military tactic of collective punishment of the civilian population, Bonsey says. Civilians without access to food, water and medical supplies puts pressure on local rebel forces to broker with the government.

Bonsey says for a freeze like the one suggested by de Mistura to have a positive impact, it will need to be fundamentally different than these previous local agreements. It will need to be equitable and to guarantee military forces from both sides aren’t simply shifted to other fronts.

Children walk on the debris of a damaged building at al-Myassar neighborhood of Aleppo, Feb. 16, 2015.
Hosam Katan—Reuters

But the ceasefire would at least give local populations relief from the daily mortar fire and air bombardment and get them much needed supplies. “The aim of the freeze is to primarily reach a reduction of violence for the civilians of Aleppo,” says Juliette S. Touma, Spokesperson for the UN Special Envoy for Syria, “and help accelerate the delivery of humanitarian assistance to people in need, including the displaced who fled the ongoing violence.”

Assad’s goal in negotiating this ceasefire may be less about relief for his citizens and more about winning support internationally, making him look more willing than the rebels to put down his weapons. As international efforts against ISIS grow, Assad’s regime is creeping back into the circle of international legitimacy. “The regime is interested in any steps that bring western countries closer toward acknowledging it as a partner and returning some level of legitimacy,” says Bonsey.

De Mistura and his Syria envoy hope Aleppo will pave the way for a political solution to the conflict that has killed more than 200,000 Syrians. But opposition forces fear that the ceasefire will only end up entrenching the status quo–the regime and its war planes against the poorly armed and trained rebels– not move the country toward a resolution to the conflict.

“It’s like treating cancer with an aspirin,” says Al Mokdad. “You can’t fix this problem with aspirin.” 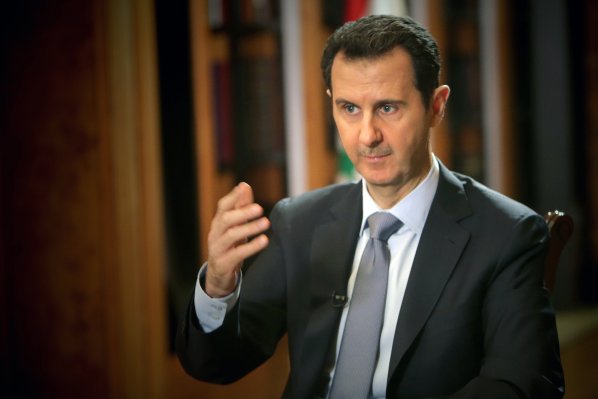 Assad Says He Receives Messages from US-Led Coalition Against ISIS
Next Up: Editor's Pick