A sick California sea lion pup sits in an enclosure at the Marine Mammal Center on Feb. 12, 2015 in Sausalito, California.
Justin Sullivan—Getty Images
By Katy Steinmetz

There are now so many young sea lions being stranded on the West Coast that federal officials say they can’t keep up. As a result, the National Oceanic and Atmospheric Administration (NOAA) issued some brutal advice Wednesday: If you see a beached sea lion pup, call the authorities, but be prepared for them not to come—at least for a while.

Normally the marine mammal stranding network, a series of facilities dotted along the U.S. coastline, will send staff to take in any seal or sea lion pup found stranded and do their best to rehabilitate it. But many facilities in the network are nearing capacity as sea lions wash ashore at a much higher than average rate. Since Jan. 1, rescuers in California have taken in about 1,000 pups—nearly four times the typical total for the first four months of the year.

“The reality is that we can’t get to all of these animals,” says NOAA stranding coordinator Justin Viezbicke.

So what’s going on? Experts at NOAA say that the culprit is rising ocean temperatures. (On a call with reporters Wednesday, a NOAA climate expert said that they do not believe the stranding increase is tied to climate change.) The warm temperatures are somehow affecting the squid, sardines and other animals that are the core diet of sea lions, perhaps driving the prey deeper into the water or farther offshore. So when mothers swim off to forage from the Channel Islands, where pups are weaned every year, they are having to stay away longer before they can come back to nurse. With less frequent nursing, pups are losing weight at unprecedented rates, and experts suspect that these weak, under-grown animals are being driven to look for food on their own before they are ready.

The root cause of the crisis, officials believe, is the odd wind patterns that aren’t cooling the ocean like they normally do. They aren’t certain of what’s behind the lack of cold winds, but they believe the patterns are creating a ripple effect through the food chain. The sea lions, at the top of that chain, are signaling that bigger things may be amiss among the larger marine food web. “There are a lot of puzzles here that we’re trying to put together,” says Nate Mantua, a NOAA climatologist. “We don’t understand it. It’s a mystery.”

This is the third bleak year in the past decade for sea lion pups. In 2013, up to 70% of all the sea lion pups born the previous year may have died due to environmental events, according to Melin, twice the amount that might not make it to maturity in a normal year. Officials say this year’s pups appear more under-nourished than any they’ve observed in the past 40 years.

And even when pups get to a rehabilitation facility, they might not make it back to sea. The Marine Mammal Center, the largest facility in California’s stranding network, saved about 60% of the animals who came to them in 2013. “The sea lion pups arriving at the Marine Mammal Center may look like barely more than skin and bones,” says Shawn Johnson, the facility’s director of veterinary science, “but these are the lucky ones.”

The mass strandings have not diminished the overall population of California sea lions, which has been thriving since becoming a protected species in the 1970s. Now around 300,000 in number, NOAA’s Melin says that another factor at work in the current crisis may be that the species is approaching its resource limit in the environment. “Based on what we’re seeing at the colonies,” she says, “we should be bracing for a lot more animals to be coming in.” 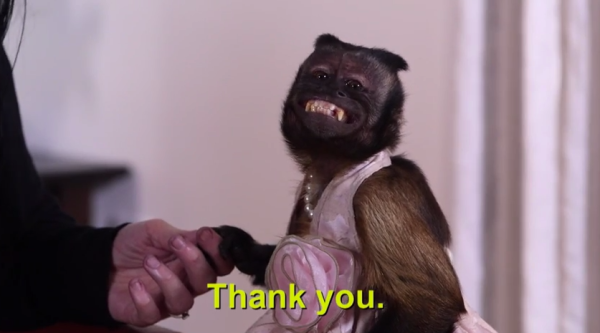 This Monkey Just Won Big at the Oscars for Animal Actors
Next Up: Editor's Pick