Jeb Bush Steps Away From His Brother's Shadow

Former Gov. Jeb Bush provided an early preview Wednesday of how he will address the central challenge of his all-but-certain presidential campaign: defining himself outside the shadow of his family.

“I love my brother. I love my dad,” Bush told an audience of business leaders and politicos during a foreign-policy speech at the Chicago Council on Global Affairs. “But I am my own man—and my views are shaped by my own thinking and own experiences.”

It was no coincidence that Bush picked a foreign-policy address to start the process of sketching the differences between his approach and those of the two Bush presidencies past. If he chooses to run, the former Florida governor will be saddled with the legacy of his brother, whose presidency was marred by two unpopular wars that sullied the family name.

Bush took tentative steps toward distinguishing his own views. “There were mistakes made in Iraq,” Bush acknowledged during a question-and-answer session, saying George W. Bush’s administration should have focused on ensuring security after the fall of Saddam Hussein. But he credited his brother’s decision to launch the 2007 troop surge that stabilized the war-torn nation, and said it had descended back into chaos because of President Obama’s decision to withdraw forces after his brother left office.

Ranging onto Obama’s home turf, Bush denounced the President for diminishing the nation’s stature on the world stage. Calling for a more assertive foreign policy that he dubbed “liberty democracy,” Bush skewered Obama’s approach as too passive toward America’s enemies and too murky for U.S. allies to rely upon. “The great irony of the Obama Presidency is this: Someone who came to office promising greater engagement with the world has left America less influential in the world,” Bush said.

“America does not have the luxury of withdrawing from the world,” Bush said. “Our security, our prosperity and our values demand that we remain engaged and involved in often distant places. We have no reason to apologize for our leadership and our interest in serving the cause of global security, global peace and human freedom.”

Bush criticized Obama for his handling of his “red line” with regards to Syria’s use of chemical weapons and his early dismissal of the Islamic State. He also whacked the President for failing to combat the threats posed by Russia’s escalations in eastern Ukraine, Boko Haram’s insurgency in Nigeria, and the personal distrust between the President and Israeli Prime Minister Benjamin Netanyahu.

“This administration talks, but the words fade. They draw red lines, then erase them,” Bush said. “With grandiosity, they announce resets and disengage. Hashtag campaigns replace actual diplomacy and engagement. Personal diplomacy and maturity is replaced by leaks and personal disparagement. The examples keep piling up. ”

But blistering Obama was the easy part of the speech. For Bush, the hard part will be drawing distinctions between his approach and that of his brother—particularly in light of the fulsome praise he has heaped on George W. Bush’s foreign policy in the past. “I’m the only Republican that was in office when he was in office as President that never disagreed with him and I’m not going to start now,” Jeb told CNN in a rare 2010 joint interview with his brother, who is seven years his senior. “I’m not going to start now. It’s just till death do us part.”

As he moves toward a presidential campaign, Bush is soliciting foreign-policy advice from a broad range of conservative thinkers, including many who advised the 43rd or 41st presidents and some who helped orchestrate his brother’s ill-fated endeavors in the war on terrorism. They include former World Bank President Paul Wolfowitz, former Secretary of State George Schultz, and former Deputy National Security Advisor Meghan O’Sullivan.

In a rare venture into policy specifics, Bush explicitly defended the National Security Agency’s telephone metadata program, which was exposed by leaks from Edward Snowden. “For the life of me I don’t understand the debate,” he said, calling the controversial program “hugely important.” The position pits himself against likely 2016 GOP primary opponent Rand Paul, a Kentucky Senator who has made the purported excesses of the U.S. surveillance state a cornerstone of his campaign and a rallying cry designed to attract independents and young voters.

In a question-and-answer session that followed his speech, Bush called for Obama to confront Russian leader Vladimir Putin—whom he described as a “ruthless pragmatist—and criticized Obama’s rapprochement with Cuba. “I think it was the wrong thing to do,” he said. Bush indicated that Obama should have allowed Cuba to feel the economic squeeze from falling oil prices, adding that he does not believe that Cuba’s dictatorship will make a transition to democratic government. “I don’t think it happens,” he added, “unless you negotiate the conditions for it to happen.”

As a governor, Bush lacks the day-to-day familiarity with foreign policy issues that some potential Senate rivals boast. But he sought to highlight his foreign policy bona fides by reciting his experience abroad, including trade missions conducted while he was governor of Florida from 1999 to 2007 and four annual trips to Asia in recent years.

A Quinnipiac University poll released Wednesday found that Bush’s name could be a drag among some Independent voters in the swing states of Colorado, Iowa, and Virginia, but most say it will not alter their decisionmaking should he face former Secretary of State Hillary Clinton. A CNN survey found that 64% of Americans associate Bush with the past, compared to 33% who say he represents the future. For Clinton, 50% associated her with the future, compared to 48% with the past.

Before Bush spoke, Democrats launched a preemptive attack that derided the former Florida governor for blaming the current Oval Office occupant for problems created by his predecessor. “The Jeb Doctrine seems to be to point fingers at the wrong Administration, cheerlead go-it-alone diplomacy, and put on blinders to the failures of the past,” said Mo Elleithee, communications director for the Democratic National Committee.

Most Popular on TIME
1
Exclusive: Alleged Hunter Biden Emails Circulated in Ukraine
2
How did the 1918 Flu Pandemic End?
3
You Can Now Get a COVID-19 Vaccine in China 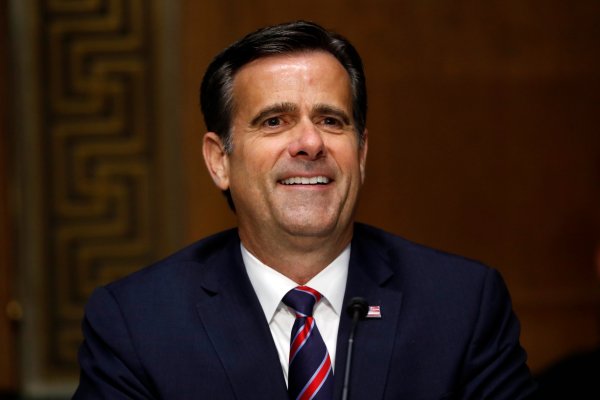