Kanye West Wants To Be 'The Steve Jobs of Gap'

Back before he was launching fashion lines, Kanye West was a lowly Gap retail employee who smoked weed on his work breaks. Now? He wants to be the creative director of the well-known clothing chain.

“I’d like to be the Steve Jobs of Gap,” West said in an interview with Style.com shortly after he debuted his Adidas Originals collection last week. “I’m talking about full Hedi Slimane creative control of the Gap is what I would like to do. And I can say this because it doesn’t conflict with my Adidas contract.”

In the interview, West talks about his desire to bring his fashion to the masses. The rapper has been working in the fashion world for several years and complained very, very loudly about how the powers that be wouldn’t let him get his ideas out. With Adidas, he thinks he has a chance to bring his apparel to a wider audience. Certainly Gap, with its thousands of retail locations, could extend that vision even more. And with the company having just posted a 9% decline in January sales at Gap stores, maybe it could use a bit of shaking up.

Once West is through eclipsing Steve Jobs, he’ll only have Walt Disney, Howard Hughes and William Shakespeare left to topple. 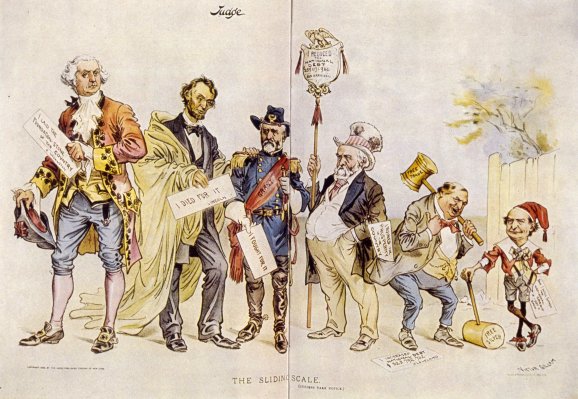 3 Shocking Facts You Didn't Know About Presidents Day
Next Up: Editor's Pick