New U.S. Secretary of Defense Ash Carter delivers his acceptance speech at the White House in Washington on Feb. 17, 2015.
Gary Cameron—Reuters
Ideas
By Karol Markowicz
Karol Markowicz is a writer in New York City. She has worked on GOP campaigns in four states.

There isn’t anything new about men in positions of power behaving inappropriately. A handsy boss, who has no filter and no fear of offending, is a staple of old movies and shows like Mad Men. For much of history people just looked the other way. These men were too powerful, to criticize them was to cross them, and to cross them might mean a lot of trouble for the whistleblower. Your career might be lost, your family ostracized.

What then can be said of people, today, looking the other way as the vice president of the United States paws woman after woman in public, with cameras flashing and their husband or parent three feet away? We’d love to imagine that the husband or father would step in, remove Joe Biden’s hands from his wife or daughter, and give him a hard, warning look. The truth is, Biden’s harassment often comes at the swearing-in events of the husband or parent. These men, reaching the pinnacle of their career, stand on a stage or at a podium with their supportive families at their side. The vice president’s attendance is itself a showing of respect and a recognition of their success. It is not the time for anyone to make a scene.

The most recent victim is Stephanie Carter. Her husband, Ashton Carter, was sworn in as the new defense secretary. As Ashton spoke at the podium, Biden rubbed Stephanie’s shoulders and whispered in her ear. She is only the latest in a series of women inappropriately groped by the vice president, America’s “Creepy Uncle Joe” as people stood by and watched. One of the more awkward moments from the Joe Biden inappropriate behavior reel is his whispering, grabbing, and ultimately trying to kiss Delaware Senator Chris Coon’ daughter Maggie. She is 13. Coons defended Biden saying that “he was being Joe” and it was just his way of being “thoughtful and sweet” to a young girl in the spotlight. Ultimately, what else could he say? Biden being Biden is an acceptable explanation to the media watching, what is a senator from the vice president’s party supposed to do?

His defenders claim he’s from a different era, the equivalent of the kissing host on Family Feud. Except this isn’t the 1970s and these women aren’t on a game show. Others find the humor in sexual harassment in a way they likely wouldn’t if Joe Biden didn’t have a (D) after his name. NBC’s Capitol Hill Correspondent Kelly O’Donnell joshed Biden was “multi-tasking” when he had his arm wrapped around a teenager while swearing in her mother, Senator Joni Ernst. Biden also told the teen “I hope mom has a big fence around your house.” Today co-host Matt Lauer wise-cracked that this was Biden’s way of “welcoming” the families of the new Senate class. Even PBS found “Biden being Biden” just so adorable.

The phrase “boys will be boys” has been used historically to excuse bad behavior by men with a shrug instead of with punishment. But in 2015, things should be different. We don’t allow bosses to rub their secretaries’ shoulders, smell their hair, or look them up and down and exclaim “holy mackerel!” all things Biden has done to daughters and wives of people with much less power than he has.

That this goes on in front of all of us, and few criticize it, is shameful. It might be hard for the families of these girls and women to stand up to the vice president. It shouldn’t be as hard for the rest of us.

Read next: Half of Americans See the Future in Hillary Clinton, Poll Says 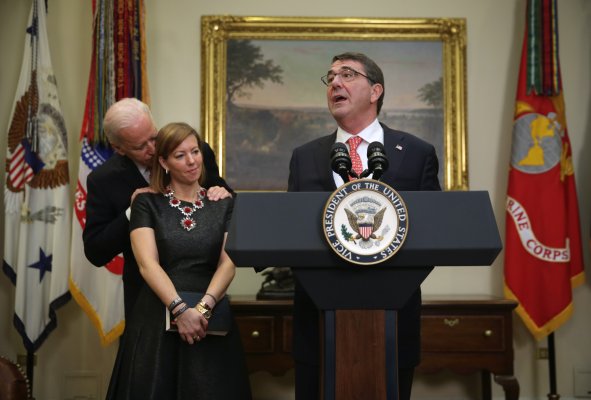 Joe Biden Got a Little Too Close to the New Defense Secretary's Wife
Next Up: Editor's Pick