Jeb Bush Says 'I Am My Own Man' on Foreign Policy

Former Florida Gov. Jeb Bush proclaimed Wednesday that “I am my own man,” in an effort by the all-but-certain 2016 Republican presidential contender to distance himself from the legacies of his father and brother.

During an address at the Chicago Council on Global Affairs that marked his first major foreign policy speech as a would-be candidate, the son and brother of presidents delivered a broadside against President Barack Obama’s leadership on the global stage.

“Under this administration, we are inconsistent and indecisive,” Bush said, according to prepared remarks released by his political action committee, Right to Rise PAC. “We have lost the trust and the confidence of our friends. We definitely no longer inspire fear in our enemies.”

His last name being both one of his strongest assets and greatest liabilities, Bush alluded to a turbulent history, especially in the foreign policy realm, as he seeks to craft his own White House campaign.

“I love my father and my brother,” he said. “But I am my own man—and my views are shaped by my own thinking and own experiences.”

Bush has spent time over the last year consulting with foreign policy experts as he prepared to mount a White House bid, but was not expected to explicitly break with either family member’s foreign policy. In broad terms, Bush also levied criticism against Obama for his handling of his “red line” with regards to Syria’s use of chemical weapons, Russia’s escalation’s in eastern Ukraine, Boko Haram’s insurgency in Nigeria, and the personal distrust between the President and Israeli Prime Minister Benjamin Netanyahu.

“They draw red lines… then erase them,” Bush said in prepared remarks. “With grandiosity, they announce resets and disengage. Hashtag campaigns replace actual diplomacy and engagement. Personal diplomacy and maturity is replaced by leaks and personal disparagement.”

A former governor, Bush’s foreign policy has largely been undefined, though emails from his time in office reveal he supported his brother, President George W. Bush, in the invasion of Iraq.

Asked by reporters on Friday about his foreign policy in the context of his family’s long history, Bush said “I won’t talk about the past.”

“I’ll talk about the future,” Bush said, according to Bloomberg. “If I’m in the process of considering the possibility of running, it’s not about re-litigating anything in the past. It’s about trying to create a set of ideas and principles that will help us move forward.”

Speaking to reporters earlier in the week about how he would address the threat of the militant group Islamic State of Iraq and Greater Syria (ISIS), Bush said, “I think we need to develop a world strategy to take ’em out.”

See the full excerpts below: 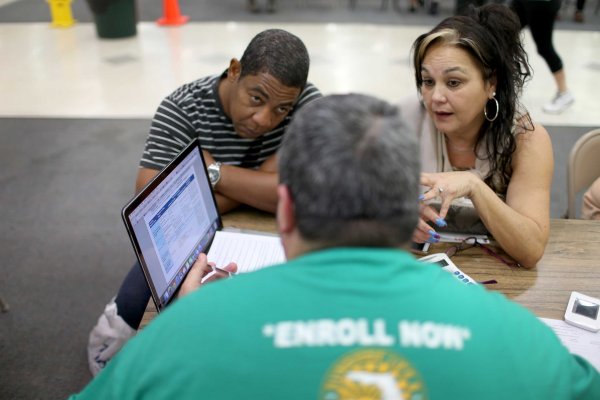 Obamacare Signups in 2015 Enrollment Top 11 Million
Next Up: Editor's Pick