On Wednesday, the state-backed Global New Light of Myanmar ran two notices on its front page signed by the President announcing the imposition of a state of emergency and martial law in the country’s embattled Kokang region.

Burma’s military chief Min Aung Hlaing, who largely made a name for himself after trouncing Kokang militants in 2009, will now be charged with bringing the insurgents to heel in any manner he sees fit.

Fighting continues to rage near the Chinese border with the Myanmar National Democratic Alliance Army (MDNAA), a Kokang militia, who commenced a brazen offensive against government positions near the town of Laukai on Feb. 9, days ahead of the country’s Union Day celebrations.

The Burmese government had previously hoped to sign a highly vaunted nationwide cease-fire with the country’s myriad rebel forces on the national holiday.

President Thein Sein spent much of the last week visiting wounded soldiers, where he promised to not lose “an inch” of the country’s territory to Kokang “renegades.”

Analysts say the timing and the high-level of coordination among major rebel militias from across northern Burma who participated in the offensive suggests that the peace process has hit the rocks.

“The idea was to make a very loud point that there are a significant number of powerful factions in the north who are not interested in mealymouthed promises,” Anthony Davis, an analyst with IHS Jane’s, tells TIME.

Despite years of negotiations, trust between the ethnic insurgents in the country’s far north and the government has been in steady decline since an artillery assault by the Burmese army on a Kachin Independence Army training camp in November killed 23 cadets.

The resurgence of the MDNAA also raises fresh questions over how a militia that had been routed five years ago was able to raise the material and tactical support within earshot of the Chinese border to launch a major offensive.

Analysts have long suspected Beijing of providing sophisticated weaponry to ethnic Chinese insurgents along its border as a way of leveraging power against Burma as it seeks to foster new relations with the West.

An editorial published in a Chinese state-linked media outlet on Tuesday sought to shoot down any notions that Beijing has been propping up Burma’s ethnic Chinese forces in the same way that Russia has been helping separatist rebels in southeast Ukraine.

“There are no grounds for comparing Kokang to Crimea. Those who are stuck in such comparisons are either spouting nonsense, or have ulterior motives,” read an editorial printed in the Global Times on Tuesday. “Peace and stability in the border regions are in China’s utmost interest.” 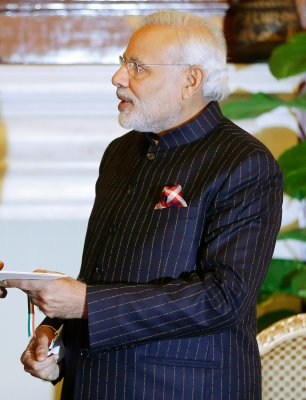 Modi's Personalized Pinstripe Suit Is Being Auctioned
Next Up: Editor's Pick