Opposing teams of the Up'ards and the Down'ards reach for the ball as they compete in the annual Royal Shrovetide Football Match in Ashbourne, Derbyshire, England on February 17, 2015.
Oli Scarff—AFP/Getty Images
By Helen Regan

One of the world’s most unusual games of soccer is taking place in the small town of Ashbourne in the English Midlands. It began on Fat Tuesday, which in the U.K. is called Shrove Tuesday, and continues into Ash Wednesday.

The Royal Shrovetide Football match is a game like no other. Instead of the regular 11-a-side soccer team, hundreds of people play on two teams, named the Down’ards (downwards) and the Up’ards (upwards). There are hardly any rules — among the few is a ban on transporting the ball in any kind of vehicle — and the annual match is played over two days, in eight-hour periods.

Footwork doesn’t really come into it, in fact the game is more of a chaotic free-for-all as opposing teams attempt to force the ball (which is made of leather and cork) towards the goal posts, which are three miles apart.

Oh, and the goals are stone structures by a river that need to be hit three successive times before the goal is valid.

Opposing teams of the Up'ards and the Down'ards stand in water as they compete in the annual Royal Shrovetide Football Match in Ashbourne, Derbyshire, England on February 17, 2015.
Oli Scarff—AFP/Getty Images

During the game, the whole town comes to a stand still and shops board up their frontages to protect against broken windows.

A butcher helps board up his shop before the opposing teams of the Up'ards and the Down'ards compete in the annual game of Royal Shrovetide Football in Ashbourne, Derbyshire, northern England on Shrove Tuesday February 17, 2015.
Oli Scarff—AFP/Getty Images

Picking a team to support isn’t hard. If you were born on the south side of the local stream, Henmore Brooke, then you play for the Down’ards. If you born to the north of the stream, you play for the Up’ards.

Opposing teams of the Up'ards and the Down'ards compete at the start of the annual Royal Shrovetide Football Match in Ashbourne, Derbyshire, England on February 17, 2015.
Oli Scarff—AFP/Getty Images

No one knows the exact origins of the Shrovetide game, also known as “hugball,” but it is believed to date back as far as 1667.

At end of play on Tuesday the Up’ards led 1-0 but the battle for the ball continues Wednesday. 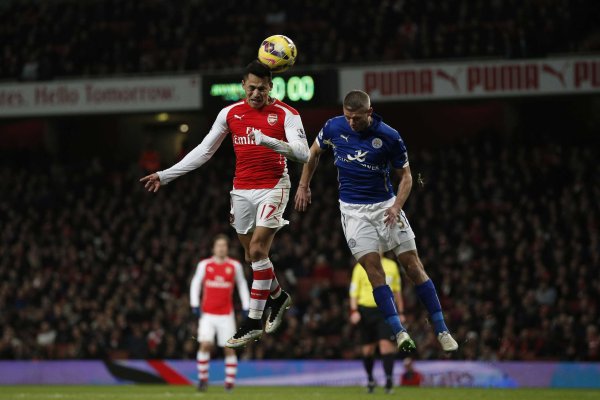 TV Rights to Top English Soccer Sold for $7.84 Billion
Next Up: Editor's Pick