President Barack Obama moved to downplay the international threat from Russia on Tuesday, branding it a “regional power” that is threatening its neighbors in Ukraine “not out of strength, but out of weakness.”

Asked by reporters if former Republican presidential nominee Mitt Romney was right in 2012 when he called Russia “America’s biggest geopolitical foe,” Obama said the country’s incursion into Ukrainian territory was just one of a “whole lot of challenges” facing the U.S. “The fact that Russia felt compelled to go in militarily and lay bare these violations of international law indicates less influence, not more,” he said.

“Russia’s actions are a problem. They don’t pose the number-one national security threat to the United States,” he said at a joint press conference with Dutch Prime Minister Mark Rutte at the close of the Nuclear Security Summit at The Hague. “I continue to be much more concerned when it comes to our security with the prospect of a nuclear weapon going off in Manhattan.”

Obama’s response may have the counterproductive effect of further provoking Russian President Vladimir Putin, whom American officials have said is clinging to visions of reasserting Russia’s role as a global power.

But the president added that the international community is prepared to place economic sanctions on sectors of the Russian economy should that country go “further” in Ukraine, leaving unstated the specific criteria that would elicit such a response.

“Our preference throughout will be to resolve this diplomatically,” Obama said. “But I think we’re prepared, as we’ve already shown, to take the next step if the situation gets worse.”

U.S. officials have only said that Russia intruding deeper into southern and eastern Ukraine would provoke the economic sanctions, but have stayed mum on whether a continuation of the status quo would result in the highly disruptive action. Some European allies are uncomfortable with the notion of sanctions on the Russian economy, in particular sanctions on its energy industry, wary of the potential impact on their own economies. As he works to unify the opposition to Russia’s annexation of Crimea on a six-day foreign trip, Obama acknowledged the concern.

“Some particular sanctions would hurt some countries more than others,” he said. “But all of us recognize that we have to stand up for a core principle that lies at the heart of the international order and that facilitated the European Union and the incredible prosperity and peace that Europe has enjoyed now for decades. And so although it could cause some disruptions to each of our economies or certain industries, what I’ve been encouraged by is the firmness and the willingness on the part of all countries to look at ways in which they can participate in this process.”

Obama asserted that Russia’s annexation of the Crimean peninsula is “not a done deal,” but added, “there’s no expectation that they will be dislodged by force.” Asked about the estimated 30,000 Russian troops massed along Ukraine’s borders, Obama said Russia is legally entitled to have its troops on its own soil, adding he believes Russia is “still making a series of calculations” about whether to push deeper into Ukraine.

“Those calculations will be impacted in part by how unified the United States and Europe are and the international community is in saying to Russia that this is not how, in the 21st century, we resolve disputes,” Obama said. “I think it’s particularly important for all of us to dismiss this notion that somehow Russia speakers or Russian nationals inside of Ukraine are threatened and that somehow that would justify Russian action. There has been no evidence that Russian speakers have been in any way threatened.” 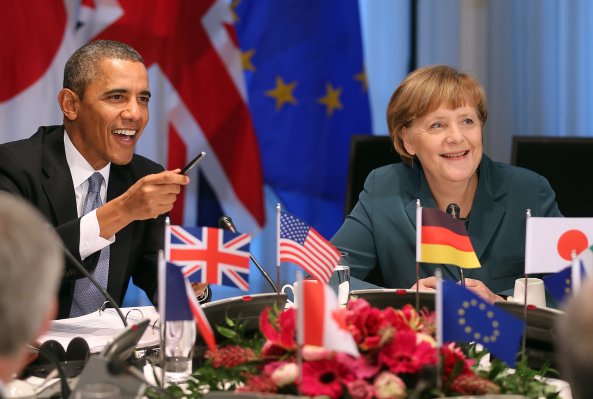 Russia Booted From G8
Next Up: Editor's Pick