What Transformed Copenhagen Gunman From Petty Thug to Lethal Jihadi?

People lay flowers outside a synagogue where an attack took place in Copenhagen on Feb. 15, 2015
Rumle Skafte—AP
By Lisa Abend/Copenhagen

In the two weeks or so since he was released from prison, Omar Abdel Hamid El-Hussein must have been a busy man. He had to learn about the discussion that Lars Vilks, a Swedish cartoonist who had once published a drawing of Mohammed as a dog, would be giving at a cultural center in Copenhagen, and figure out the best way to attack it. He likely had to stake out the city’s main synagogue as well in order to familiarize himself with its security arrangements. And he had to secure guns: the automatic weapon and the pistol he would use to kill two and injure five before being killed himself by police early in the morning of February 15.

But two days after El-Hussein committed the first terrorist attack on Danish soil in more than 20 years, many here are wondering if the really hard work didn’t go on well before that. Whether it occurred in prison, or in the gangs he was associated with, or in the larger community where he lived, something happened to turn the Danish-born 22-year-old from an ordinary criminal into a terrorist. With the number of Islamist extremists growing in Denmark and elsewhere in Europe — to say nothing of the number of attacks perpetrated by European-born terrorists — the need to answer the question of how and where radicalization occurs is becoming increasingly acute.

Two other men have been arrested as suspected accomplices in the Copenhagen attacks. They are accused of helping El-Hussein secure the weapons he used in the shootings that left 55-year-old filmmaker Finn Norgaard and 37-year-old synagogue security guard Dan Uzan dead, and of helping hide him during the roughly 13 hours between the first attack and the shootout with police that left him dead.

That man was known to police long before he showered the Krudtønden cultural center with bullets while a discussion about blasphemy and freedom of expression was underway. A known gang member, in November 2013, he was arrested after he stabbed — without apparent provocation, according to witnesses — a fellow passenger on a subway train and taken into custody. He was sentenced to two years of prison in December 2014, but was released in January because he had already served more than two thirds of his time while in custody.

What is less clear is whether El-Hussein was a hardened Islamist or simply a common criminal. Journalist Jesper Braarud Larsen covered El-Hussein’s trial for attempted homicide in December 2014 for the news website Dagens.dk, and was present in the courtroom when he was sentenced. “There was absolutely nothing about him that gave any sense of his being religious,” Braarud Larsen says of the young man who appeared in court dressed in black and with scars visible beneath his nearly-shaved hair. “He seemed most like a hardened criminal, who was no stranger to extreme violence. He said he was paranoid because he had been smoking hash that day, and he thought that the 19-year-old victim was someone who had attacked him previously.”

Increasingly, however, the distinction between common criminals and radicals is becoming meaningless, at least in Denmark. “Here, there’s crossover between criminal gangs and extremism,” says terrorism expert Magnus Ranstorp, a researcher at the Swedish National Defence College. “In other places you have a division between petty criminals and people [who join extremist groups] to give their life meaning. Here you have individuals who can switch between the two worlds, people who even use extremism as an exit strategy from gangs. Gang experience makes them more serious in extremist circles. They have access to weapons, they know how police work, they’re hardened, they have the skillset.”

The number of extremists has risen in Denmark in the past few years to around 200, according to the Danish intelligence service PET. The conflict in Syria has increased their ranks; officials say that 110 Danes have gone to Syria or Iraq as foreign fighters, though the real numbers are likely higher. Kaldet til Islam, an organization with ties to Wahabism and the British radical group Sharia4UK has been attracting a number of returning Danish foreign fighters, and posted a video in which several cartoonists, including Vilks, were depicted as targets.

There is no evidence that El-Hussein was influenced by Kaldet til Islam, and PET has admitted it had only passing awareness of him. That means his time in prison will come under even greater scrutiny as a potential source of his radicalization. Certainly it played a pivotal role for Cherif Kouachi and Amedy Coulibaly, two of the perpetrators of the attacks in Paris at the office of satirical magazine Charlie Hebdo and a kosher supermarket. Both men were known to have been in contact during their time in Europe’s largest prison with convicted jihadi Djamel Beghal.

Investigators in Denmark are looking into whether El-Hussein had the same kind of experience. “The Danish prison service is vastly different from the French and Belgian, which are serious incubators of terrorism,” says Ranstorp. “In Denmark, they are aware of this issue, and they document the cases of people who get involved, and try to address it. But of course the big issue is who did he come in contact with, what was his behavior there like?”

One measure of the seriousness with which Denmark takes the issue of extremism is the nearly 60.9 million kroner ($9.1 million) deradicalization plan recently agreed to by the government. The plan includes an ‘exit center’ for foreign fighters returning from Syria and Iraq, as well as prevention programs for susceptible youth. That the plan is viewed as potentially effective was evident in Kaldet til Islam’s response. On Feb 4, it was denounced as “a hostile desire to separate Muslims from their Islam” on the group’s Facebook page.

Whether that kind of program would have prevented the Copenhagen attacks is impossible to predict. And El-Hussein’s actions, however they were inspired, suggest a keen determination to carry out violence; sources have told Politiken newspaper that he pretended to be drunk so as to get close enough to the synagogue security to shoot them. But in the choice of his victims, the young man is representative of a nascent breed of homegrown terrorists who combine radicalized views of Islam with common crime. “He’s a hybrid,” Ranstorp says of El-Hussein. “You don’t attack these specific targets based just on criminality. You need an ideology that legitimates the model.” 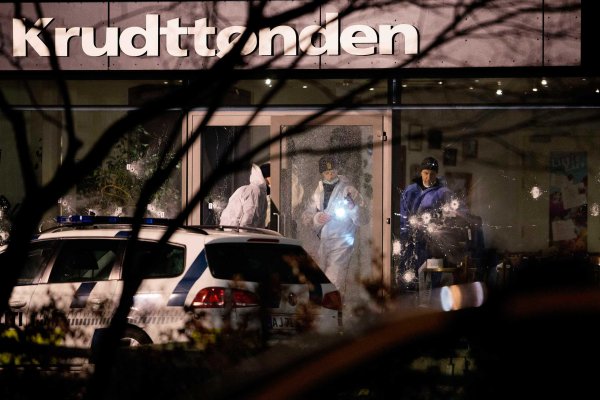 Fear in the Aftermath of Copenhagen Attacks
Next Up: Editor's Pick