It was a Weekend Update for the ages when Tina Fey, Amy Poehler and Jane Curtin took control of the famed news desk on Saturday Night Live’s 40th anniversary show. The incredible all-star trio swapped barbs about the show’s history and delivered a few topical jokes, including Curtin taking a jab at Fox News saying, “I used to be the only pretty blonde woman reading the news. Now, there’s a whole network devoted to that.”

Then they brought on a few celebrity guests to help bring the past to life. Emma Stone did an admirable take on Gilda Radner’s Roseanne Rosannadanna. Edward Norton was a passable Stefon, even cracking himself up like Bill Hader always did when playing the club reporter, before Hader and his “husband” Seth Meyers showed up to stare him down.

When there was a knock on the door, Curtin warned Fey it was always a Land Shark, but instead it was Melissa McCarthy paying tribute to Chris Farley.

While everyone was distracted by fake Farley’s antics, the infamous Land Shark showed up and devoured Fey.

Curtin tried to warn her, but Fey just didn’t believe her, until it was too late. At least now Fey has a good excuse for not hosting the Golden Globes again. 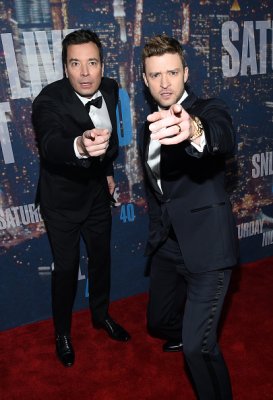 Watch Timberlake and Fallon Rap the History of <em>SNL</em>
Next Up: Editor's Pick