The U.N. Security Council votes in favor of a resolution demanding the Houthi militia's withdrawal from Yemeni government institutions during a meeting at the U.N. headquarters in New York City on Feb. 15, 2015
Mike Segar—Reuters
By Rishi Iyengar

The U.N. Security Council on Sunday ordered the immediate withdrawal of rebel forces from government institutions in Yemen, warning of “further steps” if insurgents do not cease hostilities in the Middle Eastern nation.

The demand was part of a British- and Jordanian-drafted resolution adopted unanimously by the 15-member council, Reuters reports.

The resolution “deplores actions taken by Houthis to dissolve parliament and take over Yemen’s government institutions, including acts of violence,” referring to the Iranian-backed Shi‘ite Muslim militia that has overthrown the government and prompted increasing attacks from al-Qaeda and other Sunni terrorist groups.

Besides the withdrawal, the resolution also calls on Houthi forces to come to the negotiating table for a U.N.-brokered political settlement and release the Yemeni President, Prime Minister and other Cabinet members from house arrest. 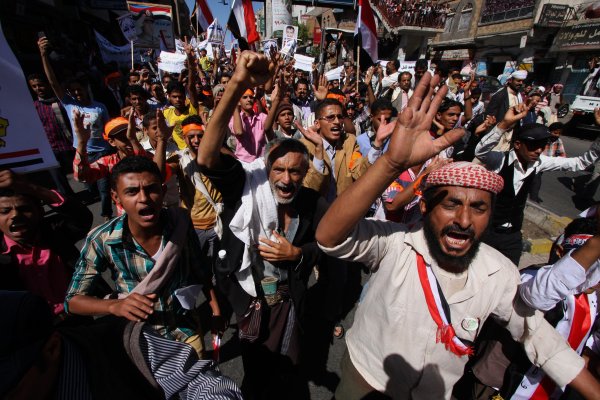 U.N. Chief Warns Yemen Is 'Collapsing Before Our Eyes'
Next Up: Editor's Pick