Beheading of Coptic Christians in Libya Shows ISIS Branching Out

Egyptians protest in Cairo what they characterise as government inaction in reaction to the kidnapping of Coptic Christians in Libya, Feb. 13, 2015.
Ahmed Masri—Almasry Alyoum/EPA
By Jared Malsin / Cairo

The Egyptian government said Sunday that a video apparently showing the execution of Coptic Egyptian hostages in Libya by militants allied to the Islamic State of Iraq and Greater Syria (ISIS) was genuine, underscoring the group’s global reach and the unity of message among its adherents.

The five-minute clip, published online on Sunday, depicts the hostages — believed to be 21 Christian Coptic laborers from Egypt, kidnapped from the city of Sirt — being marched onto a beach where they are forced onto the sand and then killed by knife-wielding executioners.

One of the killers, dressed in camouflage, speaks in English. “We will conquer Rome,” he declares, pointing his knife toward the sea.

The video has similar qualities to the filmed executions of ISIS hostages in Iraq and Syria. The hostages wear the same orange jumpsuits as the Western hostages, intended as a reference to the uniforms worn by prisoners in the U.S. detention center in Guantánamo Bay, Cuba.

In a televised address, Egyptian President Abdul Fattah al-Sisi said his country reserved the right to retaliate for the killings. He also reiterated an offer to facilitate Egyptians’ evacuation from Libya and imposed a ban on citizens traveling to Libya. The President also convened a meeting of senior security officials to discuss a response to the crisis.

The mass killings by a group that identified itself in the video as the “Tripoli Province” of ISIS gives a stark illustration of the group’s influence in Libya, a country consumed by upheaval since dictator Muammar Gaddafi was overthrown in an uprising backed by NATO in 2011. Two rival governments and a variety of militia groups are currently locked in a multipolar fight for control of the country.

“I think it’s possible that there are currently more Daesh adherents in Libya than in any other country in the world except for Iraq and Syria,” says Christopher Chivvis, a senior analyst at the Santa Monica–based Rand Corp.

“It’s possible that Libya is now emerging as a sort of second front in [ISIS’s] effort to expand from a regional into a global organization,” he says. “I don’t think there’s a direct command-and-control kind of relationship where core ISIS is able to, with any degree of confidence, order specific operations in Libya. I think there’s moral and probably also financial and potentially other forms of support.”

A militia group in eastern Libya declared its affiliation with ISIS last year. Since then, fighters allied to the group have claimed responsibility for attacks across the country, including an assault on a luxury hotel in Tripoli in January.

“The problem is that overlaid on this ISIS threat is a deeply divided country, a civil war. And ISIS is exploiting the fissures of that civil war,” said Frederic Wehrey, a senior associate in the Middle East Program at the Carnegie Endowment for International Peace.

Analysts say ISIS is seeking to attract the support of existing militia groups in Libya in hopes of gaining an upper hand over rival organizations like al-Qaeda or local insurgent groups like Salafist militia group Ansar al-Sharia. The Institutions of the Libyan state have eroded, leaving control of specific cities in the hands of a range of separate armed groups.

“[ISIS] is benefiting from the decline of jihadist groups in the east, like Ansar al-Sharia,” said Wehrey. “It’s co-opting or luring many members of the jihadist movement in the east into its ranks. It’s trying to carve out new turf.” 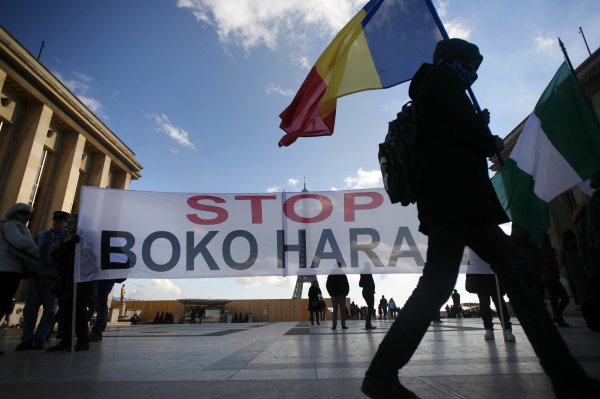 Teenage Girl Kills 16 in Suicide Bombing in Northeast Nigeria
Next Up: Editor's Pick