The Danish Prime Minister Helle Thorning-Schmidt has insisted that the series of shooting attacks in Copenhagen will not alter the country’s belief in the freedom of speech.

“It’s time for unity in Denmark. The coming days will be tough to get through. We have to understand what has hit us, but we must insist on acting as we do. Think and talk like we want to. We are who we are.”

Police continued their investigation after a gunman who had already killed one person and injured three officers in an attack on a panel discussion dedicated to free speech, struck again on Sunday morning, this time killing another and injuring two outside the city’s main synagogue. Hours later, in a dragnet the likes of which this peaceful Nordic city has never seen, the shooter himself was shot dead by police.

The attacks began just after 3:30pm on February 14. A gunman armed with an automatic weapon sprayed a café in a cultural center in the eastern part of Copenhagen with bullets killing 55-year-old documentary filmmaker Finn Nørgaard and wounding three members of security forces. At the time, the café was hosting a discussion on freedom of expression, that included among its panelists the French ambassador to Denmark, François Zimeray, and Lars Vilks, a Swedish cartoonist and art historian who has been the object of several assassination attempts since he published a cartoon in 2007 that depicted the prophet Mohammed as a dog. Vilks later told the press he was certain he was the object of the attack.

“They fired on us from the outside. It was the same intention as Charlie Hebdo except they didn’t manage to get in,” Zimeray told Agence France-Presse. “Bullets went through the doors and everyone threw themselves to the floor.

After finding the car in which the gunman had initially escaped, police fanned out throughout the city, erecting roadblocks and passenger controls at airports and train stations in an attempt to keep the perpetrator from slipping across the border to Sweden or Germany. But he hadn’t gone that far. Just after 1am, a gunman fired shots in front of the city’s main synagogue, wounding two police officers and one member of the synagogue who was controlling access to a bar mitzvah being celebrated by roughly 80 people inside. That member, 37-year-old Dan Uzan, later died of his wounds. “It’s what we’ve always feared, said synagogue president Daniel Rosenberg Asmussen in an interview with Danish television DR2. “It is also what we have always warned could happen in Denmark.”

Overnight, the center of the city was locked down, and police advised citizens to stay in their homes or, if they were already out, in the bars and clubs where they found themselves. Around 4 am, a suspect returned to an apartment in the northern part of the city that police had been monitoring since the afternoon. When police approached the man, he began firing at them. In the ensuing exchange of shots, the man was killed. “We believe that the man shot by riot police this morning is the one behind the two attacks,” said chief police inspector Torben Mølgård Jensen at an early morning press conference.

The similarities between the Copenhagen shootings and the attack that took place in Paris last month in the offices of satirical magazine Charlie Hebdo and a kosher supermarket were lost on no one. “After the Charlie Hebdo event, we knew that there would be more attention directed toward the cartoon affair,” says Lars Erslev Andersen, a senior researcher on terrorism at the Danish Institute for International Studies.

But the novelty of the Copenhagen shooting lay in its execution, not its planning. Since 2005, when the Danish newspaper Jyllands Posten commissioned and published 12 cartoons depicting the prophet Mohammed, Denmark has been the target of several planned attacks, all of them foiled until yesterday. Although outrage about the cartoons had ebbed in recent years, it was, as the Charlie Hebdo case suggests, revived by ISIS and groups linked to al-Qaeda. And while police don’t yet know whether the perpetrator was acting alone, or as part of a network, they do know that extremism is rising in Denmark. Terrorism expert Magnus Ranstorp is chairing a committee created by the city of Copenhagen to produce an action plan aimed at reducing radicalization of Muslim youth. “This came about in response to a huge increase in referrals of people judged to be extremist,” Ranstorp says. “Those who are closest to it are all saying, yes, it’s increasing.”

Now, ordinary Danes have no choice but to recognize the same thing. “As a nation we have lived through a few hours we will never forget,” said Thorning Schmidt at the press conference. “We have tasted the nasty taste of fear and powerlessness that terrorism would like to engender.” 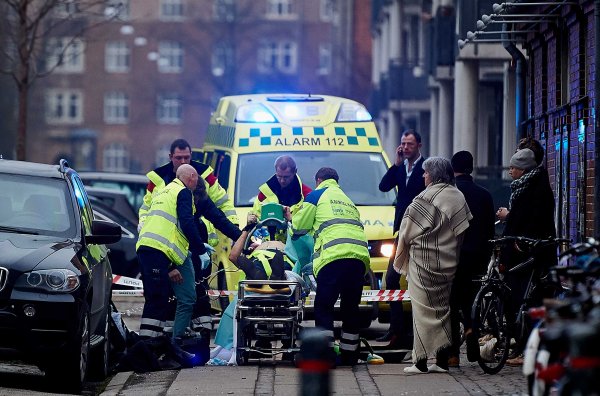 Terror in Denmark
Next Up: Editor's Pick