A Valentine’s Day blizzard with hurricane-force winds was set to pummel much of New England on Saturday.

Blizzard warnings were issued in six states—Connecticut, Maine, Massachusetts, New Hampshire, New York and Rhode Island—as the fourth major snowstorm of the season made its way toward the East Coast. Iat had already dumped eight inches in parts of Michigan by Saturday afternoon.

MORE: It’s Better to Be Single on Valentine’s Day

New York City and Philadelphia remained under winter weather advisories while Boston, which has already experienced a historic total of almost eight feet of snow this season, could get another foot. Parts of Massachusetts were forecasted to receive 18 inches, and Cape Cod could experience hurricane-force wind gusts.

The bottom line is, stay inside with your Valentine and don’t poke your head out until April. And if you’re single, you have a perfect excuse to do absolutely nothing. 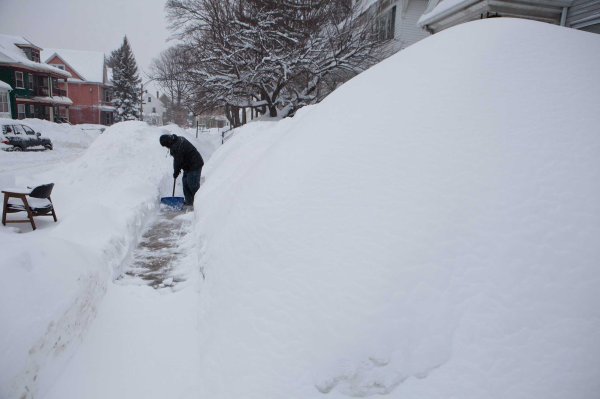 9 Insane Facts About Boston's Snow
Next Up: Editor's Pick