Cables from Iwo Jima: An Eye-Witness Account of the World War II Battle

On Iwo Jima last week at least 40,000 Marines fought to the death with 20,000 entrenched Japanese in an area so constricted that the troops engaged averaged twelve men to an acre. Ashore with the marines, TIME Correspondent Robert Sherrod radioed his account of the battle…

With those words, the Mar. 5, 1945, issue of TIME launched into a description of the horror and bravery that Sherrod had witnessed in the days since the U.S. struck the island of Iwo Jima — 70 years ago, on Feb. 19, 1945 — in what would be one of the Allies’ most crucial World War II victories. As the magazine explained the readers, the island itself wasn’t much, just a few square miles of beach and cliffs, but it was one of best-defended locations in the world. Going in, it was known that the Marines who fought there would likely take heavy casualties, but that there was no other option: winning Iwo Jima — site of airfields used by the Japanese, which would be game-changers if put to use for U.S. airstrikes of Tokyo — was absolutely necessary.

Seven decades after the battles, Sherrod’s cables to his editors provide unusual insight into the experience at Iwo Jima. They’re written during the fighting, and the man behind them was uniquely qualified to comment on what he was seeing: Sherrod had covered battles throughout the Pacific, and in 1944 had published a book, Tarawa: The Story of a Battle, about what he experienced on that atoll. (He would go on to write a book about his later experiences too, On to Westward: the Battles of Saipan and Iwo Jima.)

Sherrod had gone ashore with a combat team on the day the battle began and, in the Feb. 26 issue, TIME was able to quote from a message that he had radioed from before the attack. Typically, issue dates are a week ahead of publication, which means it would have been printed pretty much as soon as his Feb. 19 message arrived. In describing the fighting that had begun, the magazine passed on his warning to readers that “there is little overoptimism to be found among admirals, generals or their troops.” In fact, Sherrod’s cable had been a warning to his editors, not to readers: “I suggest that you confine this week’s action report to a simple statement that we have landed on Iwo Jima,” he also wrote, cautioning that the magazine should not rely on reports from any newer journalists among those present, who might “endeavor to win the war in the first flash.”

The next message from Iwo Jima came on Feb. 21, with the note that it would arrive in time to be printed in LIFE magazine (TIME’s sister publication) but not in TIME itself; LIFE did end up printing nearly the entire cable, about 2,500 words long, pretty much verbatim. (Interestingly, the magazine cut out some of his less objective passages, which are highlights in hindsight: “But the ultimate factor in the fall of Iwo Jima can be attributed only to the character and courage of the United States marines. In war there comes a time when power alone has reached its limits, when planes no longer can be called upon to deliver bombs effectively, when ships have no more shells to fire, when defenses will no longer yield before fire power, however heavy. That is the time when men on foot must pay for yardage with their lives. That is when they call on the marines,” he wrote. LIFE printed only the first sentence.)

Further messages arrived over the next few days, as the Marines captured Mount Suribachi and a Japanese airfield, among other objectives. “This is a record of twenty-four hours in Iwo Jima,” the Feb. 24 missive began. “It covers the period between 4:00 PM of the fifth day and 4:00 PM of the sixth day, but it might apply to any twenty-four hours in the day following our landing and capture of Motoyama airfield number one. After that early capture, the Iwo Jima battle settled down in the same grueling routine described herein – the slow advance of the front lines, the incessant booming of our artillery and naval gunfire, the monotonous whine of the Jap snipers’ bullets.”

That cable, combined with some details from the earlier messages, became the main Mar. 5 report on the situation, which ran under the headline “It Was Sickening to Watch…” accompanied by the map reproduced above.

At left, a page from a cable sent by TIME correspondent Robert Sherrod on Feb. 24, 1945. At right, a page from the Mar. 5, 1945, issue of TIME. The highlights have been added to indicate how Sherrod’s observations were used by the magazine. On a desktop, roll over the picture to zoom; on mobile, click to zoom. 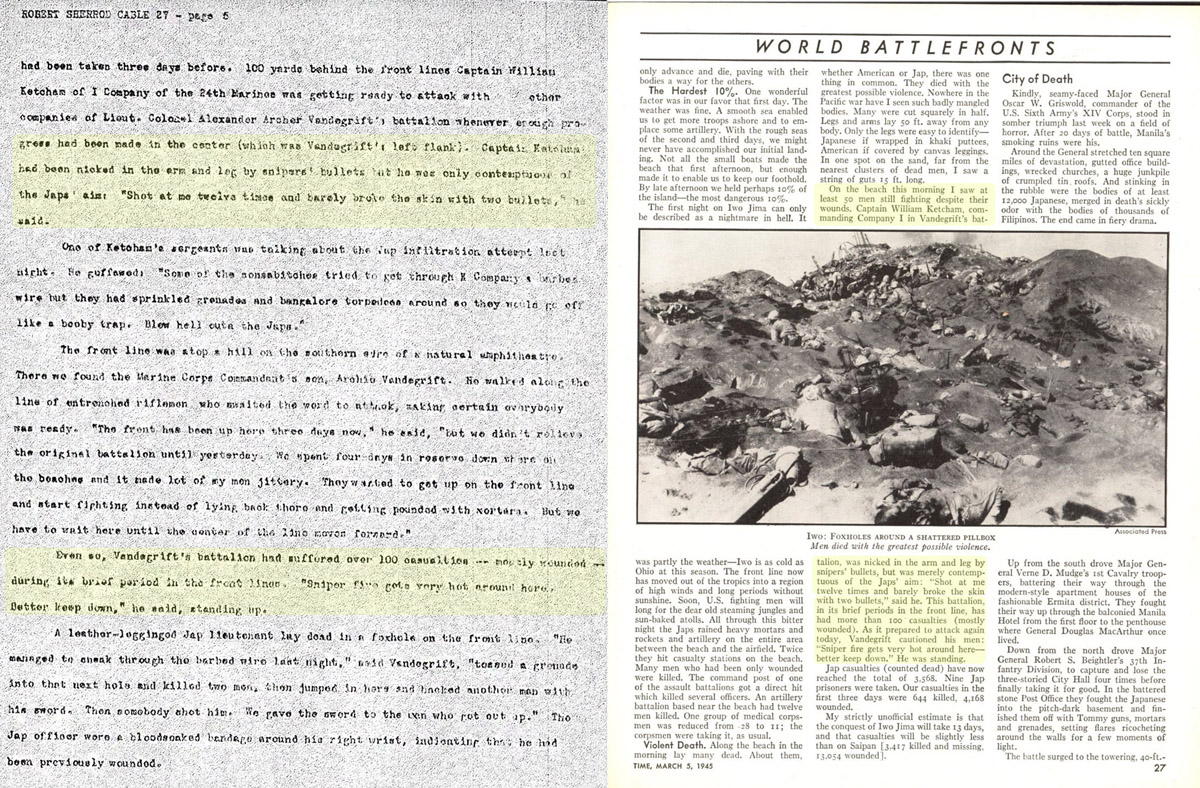 Not every detail of that 24-hour period made it to print, including his sign-off, telling his editors that he could look forward “to another 24-hour period of creeping warfare, and to other similar periods after that.”

Many such days would follow: the battle would last more than a month.

Read the full story, here in the TIME Vault: It Was Sickening to Watch…

Boko Haram Is Hardly a New Phenomenon in Nigeria
Next Up: Editor's Pick