Vanessa Bayer: This Is What Haim Should Do On Tour with Taylor Swift

When Vanessa Bayer isn’t cracking people up with her impressions of Miley Cyrus and Hillary Clinton on Saturday Night Live, she can be found moonlighting as media coach Janessa Slater on Sound Advice. On the Above Average web series that Bayer created with her brother, Jonah, PR expert Janessa Slater sits down with artists like Drake, offering helpful advice about things like how to set up a good JDate profile and whether he should change his name. The interviews, which have included artists like TV on the Radio, Demi Lovato, The Wanted and Tegan and Sara, are uncomfortable and hilarious.

With a new season of Sound Advice kicking off on March 12th on Above Average, TIME talked to Bayer about the series:

TIME: Are the artists in on the joke?

Vanessa Bayer: Yes. We try and have them watch episodes before they do it. We always improvise a lot, so we don’t always show them the questions in advance. Sometimes we will write responses for them, if they want to use them, but they don’t have to. Sometimes we don’t show them anything unless they want to see it, but because we improvise so much it’s not always useful for them. It just depends what the bands want. A lot of what ends up in the final cut is the improvised stuff, because that tends to be funnier.

Some of the bands are really good actors, then, because sometimes they stare at you like you’re completely insane.

I know! Sometimes that’s very off-putting for me because I know that they’re acting, but still. One thing that I think is great about this series is that it shows how great these bands are. They’re so funny, they’re such good actors, they have these skills beyond what you see when they’re performing music. Obviously music is a really good skill, but they are also able to do all this comedy stuff. It’s interesting for my brother and I and our director, Pete Schultz, who writes some of the questions, too, we put these questions together and then we see the band and we get nervous to say these things to them. One episode was with Aimee Mann and Ted Leo, who are in this band The Both — we were so excited to meet them, because we are all such huge fans. The first question was about them being on Social Security and I was so nervous to say it! Of course, they were such good sports about it. My brother said he almost ran out of the room because he was so nervous about it, but I’m the one who actually had to say it!

Your interviews can get uncomfortable in a way that reminds me of Larry David. Is that intentional?

That’s sorta the vibe we’re going for. One thing I have to say about the bands is that they will all respond differently. Some will just stare at me, but others will get really involved. Like Sara Bareilles was really aggressive with me, which was so funny. Some bands will joke back and will improvise with me. Even when they know what the questions are, even if we give them a suggestion of a response, they decide what they think of me. A lot of bands have multiple people and none of them will like me, except for one. Or it’s just a difference in how they are playing it where one will be more accepting and the other won’t be. It’s interesting because it shows the different personalities of the band members, even when they are acting. The TV on the Radio one was so fun to do because they were up for anything and they responded so well when I told them which different member of 90210 they were like and I told one of them that he was Jim Walsh, which is the dad.

Rumors are circulating that Fun. are breaking up. What would Janessa would tell them?

I love those guys. We did our first Sound Advice with them. I think that little French weirdo Jack will be fine, because he’s got that high school side project. That little singer will be great because he’s got pretty good hair and stuff. And Andrew, he’s my guy, he’s the one that will become the millionaire.

Haim is going on tour with Taylor Swift. How would Janessa advise them?

Maybe Haim can try parting their hair on the side to look a little less hipster, because Taylor Swift isn’t really like that. Four girls is a lot, so maybe they should add a fifth girl — like Janessa — to the crew, because while Haim sings and plays instruments and people love Taylor, who’s the person who is really going to bring the crowd out? They should add Janessa because she has a lot to offer as far as beats, lyrics, style and accessories.

Do you think Miley Cyrus will ever come to Sound Advice?

That’s my dream. We’ve reached out to her and she’s been really nice about it, but I think she’s one of the busiest human beings in the world. Another dream guest is Heart, because I love them so much and I sing Heart in karaoke all the time and I really want to show that to them. That’s not the only reason why I want them, though. I just love them.

What do you get out of a web series that you don’t get on SNL?

On SNL you get to do a bunch of different characters, which is really great, but on this web series I get to do one character, and that’s really fun. As the series progresses we get to find out more about Janessa and her ex husband Darren. I do some writing on SNL, too, but on the web series we write it all. It’s been fun digging into this very big mess of a woman. 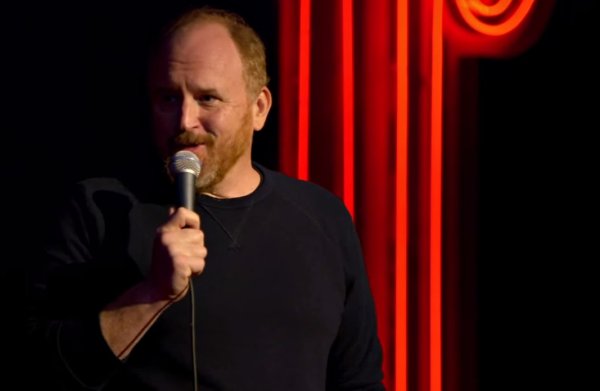 Watch Louis C.K. Take On Babies and Gay Marriage in His New Stand-Up Special
Next Up: Editor's Pick