Protesters in Taiz, Yemen, on Feb. 11, 2015, shout slogans against Houthi Shi‘ite who have seized power in the country's capital, Sana‘a
Anees Mahyoub—AP
By Noah Rayman

Secretary General Ban Ki-moon warned the U.N. Security Council on Thursday that Yemen was “collapsing before our eyes,” as a powerful al-Qaeda affiliate took advantage of the power vacuum in the country’s capital to seize a Yemeni army facility.

Yemen, the Arab world’s poorest nation, has been rocked by sectarian and political violence that came to a head last week, when the Houthi rebels that recently toppled the country’s President dissolved parliament.

On Wednesday, thousands of people in Sana‘a, the capital, protested the effective coup by the predominantly Shi‘ite group, and the U.S., Britain and France all closed their embassies amid security concerns.

As if to highlight the potential for turmoil, al-Qaeda in the Arabian Peninsula (AQAP), the powerful al-Qaeda branch that controls large swaths of territory in the southeast, said Thursday that they had seized the headquarters of a Yemeni army brigade, the New York Times reports. While the Houthis are strongly opposed to the Sunni extremist group, the rudderless government in Sana‘a has risked empowering AQAP.

“Let me be clear,” Ban said. “Yemen is collapsing before our eyes. We cannot stand by and watch.”

The Houthi movement, which overran Sana‘a in September, had been overseeing talks among various factions to form a new government since the group’s aggression prompted President Abdel Rabbo Mansour Hadi to resign last month. But the group disbanded the government on Feb. 6.

Ban called for Security Council members to de-escalate tensions and return the factions to the negotiating table. “We must do everything possible to help Yemen step back from the brink and get the political process back on track,” he said. 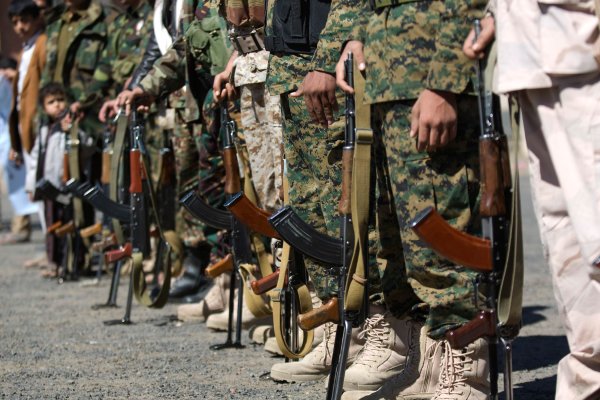