Is Pope Francis Too Political?

Pope Francis attends the opening session of the Extraordinary Consistory for the creation of new cardinals at the Synod Hall on Feb. 12, 2015 in Vatican City, Vatican.
Franco Origlia—Getty Images
By History News Network
History News Network

The New Republic (NR) recently featured an article by Elizabeth Stoker Bruenig entitled “Pope Francis: Radical Leftist?” It quoted a piece in The Week entitled “How Pope Francis allows politics to distort the Christian faith.” Its author called instead for “a truly humble papacy, where politics is avoided.” The charge that the pope is too political is not new and has just intensified in rightwing circles since Rush Limbaugh claimed in 2013 that the pope’s words regarding capitalism were “just pure Marxism.”

In addition to the pope’s criticism of the excesses of capitalism and globalization, he has voiced opinions on numerous other issues including climate change, poverty, inequality, and gay rights. Two recent papal actions, his advancing the case of the assassinated Salvadoran Archbishop Oscar Romero for sainthood and the pope’s agreement to address a joint session of the U.S. Congress when he visits the USA in September, also have strong political implications. As HNN editor Rick Shenkman points out in commenting on an article in The Nation, “the Pope’s selection of Romero reflects a conscious embrace of liberation theology,” which “conservative forces in the Catholic Church long opposed.”

In The Nation article (by Greg Grandin) we can read more about the background of this theology and why conservatives opposed it, for example, that it aligned “the church with the poor” and condemned “US-backed militarism.” It does not mention, however, that both of Francis’s predecessors criticized it. As I have mentioned elsewhere, John Paul II was convinced that the communist rule he had experienced in Poland was evil and that liberation theology reflected too much Marxian influence. Before succeeding John Paul II, Benedict XVI had authored two criticisms of liberation theology, Instruction on Certain Aspects of the “Theology of Liberation” and Instruction on Christian Freedom and Liberation. In some preliminary notes in 1984, he acknowledged that there were different forms of this theology but that his criticism was directed at “those theologies which, in one way or another, have embraced the marxist fundamental option” and that “an analysis of the phenomenon of liberation theology reveals that it constitutes a fundamental threat to the faith of the Church.”

The NR piece mentioned above in the first paragraph noted that rightwing thinkers have not objected to papal statements supportive of their views and that it is fallacious to think that religion should be kept separate from politics—a mistake that leftwingers also sometimes make.

All of this controversy about the pope’s “politics” reminds me of a similar one I wrote about long ago (in a 1968 dissertation). And that controversy occurred in the late nineteenth century. It involved Russia’s leading philosophic and religious thinker, Vladimir Soloviev, and a group of conservative nationalists I labeled Russophiles. Their argument stemmed from Soloviev’s alliance with Russian liberals and his belief that religion was not just a private matter but should infuse our political actions.

Born in 1853, Soloviev had been a friend of Dostoevsky, who was a generation older, and up until the novelist’s death in 1881 the young philosopher (and poet) had been considered more of a religious conservative than a liberal. But as with the nationalistic Dostoevsky, Soloviev believed that humans could help usher in the Kingdom of God on earth, and this belief encouraged a more activist approach to change than that entertained by Russophiles. During the 1880’s Soloviev’s criticism of anti-Semitism and Russian nationalism increasingly alienated him from conservatives. His opposition to the execution of the assassins of Alexander II (in 1881) and his ecumenical thinking, which Russophiles considered too pro-papal, also angered them. But it was not until the late 1880s that Soloviev began cooperating with liberals in the pursuit of the common good, of a more just social and political order, which he thought was a necessary prelude to ushering in any Kingdom of God on earth.

Like many conservative Americans today who believe the USA is exceptional—“the United States does continue to differ from most other developed democratic countries. And the heart of that difference is religion” (see also GOP platform statement)—many of the Russophiles thought that Russia was uniquely good. They thought it was better than other countries because it best reflected true Christian principles. Soloviev, however, disagreed, he thought that Russia was unjust in many ways, for example in discriminating against its many non-Russian nationalities—by 1897 Russians were outnumbered in their own empire by all the “minorities” in it such as Ukrainians, Poles, and its many Muslim peoples. To Soloviev’s mind, an unjust society could not be truly Christian. Justice was a minimal demand for creating a Christian society, and he stated that many non-believing seekers of justice and progress were more truly Christian than those who called themselves Christian but defended injustices such as discrimination.

When a severe famine struck Russia in 1891, the tsarist government at first attempted to downplay the crisis and prevent independent social efforts to alleviate it, but Soloviev, Leo Tolstoy, and many Russian liberals cooperated to awaken public opinion and aid the famished. Soloviev criticized the Russophiles for refusing to join with liberals in the aid effort. But the Russophiles, like many U.S. conservatives today, believed that it was dangerous to cooperate with liberals, that doing so might pollute the faith of Christian believers.

For Russophiles, saving one’s soul was the chief task of any good Christian. Sure, one should be kind to one’s neighbor and practice private charity; but politics, they believed, should be left to the Christian autocratic tsar and his ministers. If the common people became too involved with politics, with private institutions, with trying to change laws, it would just corrupt their Christian souls.

Reading some of Pope Francis’s words and about liberation theology and its opponents, one senses a similar conflict to that between Soloviev and his conservative opponents. Like Russia in the 1890s, the Latin America in which liberation theology, Salvadoran Archbishop Romero, and Pope Francis all matured was an area peopled by a rich elite and a majority of poor people, mainly peasants; and the Church was mainly affiliated with conservative, authoritarian regimes. And as in Russia, only a small minority of church leaders, like Romero, were sympathetic to a theology of change, which criticized existing society and stressed providing more help for the poor.

In the late 1890s, Soloviev wrote his major philosophic work dealing with ethics, The Justification of the Good. In it he maintained that the main role of the government was to aid and defend the weak—each individual “should have secured to him material means necessary for worthy existence and development, and we should “pity those who labor and are heavy laden, and not . . . set a lower value upon them.” Not only was Soloviev critical of unbridled capitalism, but he also believed that its proponents failed to value sufficiently our common environment. He believed that seeking “material wealth as the end of economic activity may be called the original sin of political economy.” Furthermore he stated that humans have an obligation “not to misuse, exhaust, or devastate it [the environment], but to improve it, to bring it to greater power and fullness of being. Neither our fellow-men nor material nature must be a mere passive or impersonal instrument of economic production or exploitation.”

Pope Francis’s 2013 criticism of capitalism and his more recent claim that global warming is primarily manmade—“I don’t know if it (human activity) is the only cause, but mostly, in great part, it is man who has slapped nature in the face”—sound very much like Soloviev in the 1890s. For months, the pope has been working on an encyclical on the environment and global warming, which he hopes to complete by this summer. Chances are good that when it appears conservative global warming deniers will criticize it, and some will say that he should stick to religion. But like the Russian Soloviev more than a century ago, Pope Francis believes that our religious beliefs should inspire and infuse our efforts to further the common good.

Walter G. Moss is a professor emeritus of history at Eastern Michigan University and Contributing Editor of HNN. For a list of his recent books and online publications, click here. His most recent book is “An Age of Progress? Clashing Twentieth-Century Global Forces” (Anthem Press, 2008). 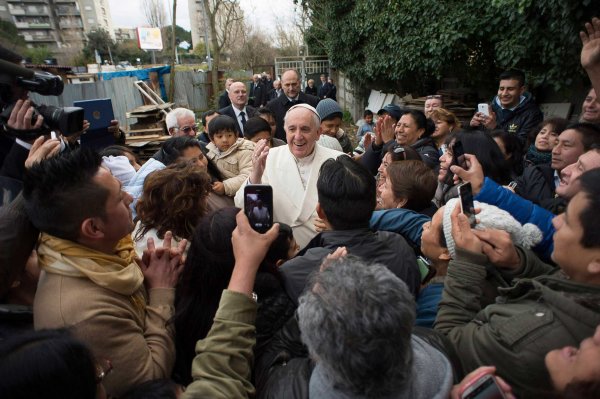