“We … see faith being twisted and distorted, used as a wedge–or, worse, sometimes used as a weapon,” President Barack Obama recently told the National Prayer Breakfast. “We have seen violence and terror perpetrated by those who profess to stand up for faith, their faith, professed to stand up for Islam, but, in fact, are betraying it. We see ISIL, a brutal, vicious death cult that, in the name of religion, carries out unspeakable acts of barbarism.” A pretty strong statement, one would think. But it went largely unnoticed because of what the President said next: that Christians should be humble, because terrible acts–the Crusades, the Inquisition–had been committed in the name of Christ. Undoubtedly true too. My family was chased from Spain by the Christians in 1492, after Jews had lived there for centuries peacefully–if not totally free–under Muslim rule.

Assorted historical ignorami rose to challenge the President on the Crusades, including, sadly, former governor of Virginia Jim Gilmore, who accused the President of not believing “in America and the values we share.” But I’m not going to waste a column shooting ducks in a barrel. I’m more interested in another question. Why is the President willing to say all that stuff about ISIS terrorists and not call them what they actually are: Islamic radicals?

At first glance, this might seem a classic case of political correctness–which can be defined as avoiding hard truths in order to salve soft sensibilities. It’s certainly true that it is unfair to indict a global faith followed by more than 1.6 billion people, the overwhelming majority of whom consider ISIS an insane distortion of the Prophet’s teachings. “ISIS is a political movement,” says Vali Nasr, dean of the School of Advanced International Studies and a former Obama Administration official. “It is an anticolonial movement, an attempt to separate whites from browns … Why should we be coronating ISIS and giving it the credibility it craves by calling it an ‘Islamic’ movement?”

But ISIS is, most definitely, a twisted extrapolation of a religious-political trend that gained traction in the region about a hundred years ago, after the egregious European gobbling, slicing and dicing of the Middle East. When you look at all the straight-line borders in that part of the world, you can be sure the locals didn’t draw them. Anger over the European usurpation is one thing Shi’ites and Sunnis have in common. The Iranian revolution of 1979, which imposed a brand-new form of political Shi’ism on a freewheeling country, was a reaction to the Western-imposed government of the Shah. On the Sunni side, the radical Salafist movement began in the late 19th century, also as a reaction to Western imperialism and ideas. It has become a powerful strand of thought in the Arab world.

“We have a serious internal debate in one of the world’s three great monotheisms,” says Michael Hayden, the former CIA director. “It has to be faced head on.” It is fine to call the ISIS adherents thugs and gangsters, but they are also Muslims. “Of course this is an Islamic issue,” Hayden continues. “It’s not about all Muslims or even the vast majority,” but reactionary Islamic radicalism–militant Salafism–is the source of the ongoing violence.

And the wellspring of Salafism is Saudi Arabia’s extreme, expansionist Wahhabi Islamic sect. Part of the reason Obama can’t utter the words Islamic radicals is that we have not been able to have an honest conversation about our Arabian ally. The Saudi royal family is a source of stability in the region, and under the late King Abdullah, it was a mild force for reform, especially in education. But the Saudi elites have funded not just al-Qaeda but also radical madrasahs throughout the Islamic world. They do it cleverly, privately, through “charitable” institutions. The impact has been enormous. In the 1990s, I asked Benazir Bhutto of Pakistan how her country had changed in the previous 25 years. “I used to be able to go out on the street wearing jeans” and without a headscarf, she said. I asked her why she couldn’t do that now. “The Saudis,” she replied, immediately–a reference to the Saudi-funded madrasahs that were rapidly replacing the ineffective public schools in her country. The Taliban came out of those madrasahs, just as a great many of the ISIS criminals do now.

This is not just an Obama problem. Both presidents Bush were way too close to the royal family. There is a secret section of a report by congressional intelligence committees that may relate to the Saudi role in the attacks. That section should be made public now, as an ongoing suit by the families of 9/11 victims has demanded. If we are going to continue to donate American lives to the fight–and sadly, we must, to protect our country from terrorist attacks–we need to be clear about exactly who the enemy is. 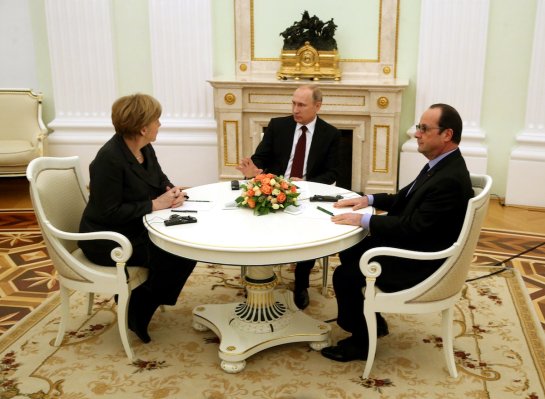 Another Conflict in Ukraine: Differing Versions of History
Next Up: Editor's Pick