What Critics Are Saying About Fifty Shades of Grey

Should Fifty Shades of Grey figure into your Valentine’s Day plans?

Well, after a highly aggressive marketing and public relations campaign that, for better or for worse, couldn’t help but grab your attention, the reviews are in.

Here’s what critics (including PEOPLE’s very own Alynda Wheat) have been saying about the film starring Dakota Johnson and Jamie Dornan that began as Twilight fan fiction.

• “Fifty Shades of Grey is exactly what it promises and little more. Johnson is pretty terrific while Dornan does what he can with the material he is given, and they do make a somewhat entertaining couple. The film is an explicit and unapologetic female escapist fantasy in a time when such things are few-and-far between in Hollywood. Sam Taylor-Johnson has crafted a gorgeous looking motion picture that looks grand without necessarily calling attention to itself.” – Scott Mendelson, Forbes.

• “Like the character who inspired her, Twilight’s Bella Swan, I expected Ana to be meek and featureless and utterly passive, a blank, empty vessel for readers’ and viewers’ sexual and romantic longings. And I suppose Ana is that, a little bit. But in the movie, she’s also funny and expressive and centered, not sapped of agency as it seemed she might be, not the timid, self-sacrificing mouse of so many melodramas of this ilk. Credit to Kelly Marcel, who wrote the screenplay, for that, and of course to Taylor-Johnson, who stages this beloved, closely held material with a respectful but not obsequious smile. But it’s Dakota Johnson, playing Anastasia, who really brings her to life.” – Richard Lawson, Vanity Fair.

• “The blame begins with James’ artless, witless source material, which began its literary life as a work of Twilight fan fiction. That explains the story’s Northwest setting, Seattle, and the maddening way its adult characters behave like dopey teenagers. Grey, a vaguely defined “businessman,” is an unconvincing mix of Regency aristocrat and high-school hunk, while Anastasia is another Bella Swan (Twilight), though with even bigger daddy issues.” – Rafer Guzmán, Newsday

• “Fifty Shades is not without its howlers. More than once, we find Christian mournfully playing the piano, the instrument that’s lazy shorthand for emotional depth. Anastasia’s constant refrain of ‘Why won’t you let me in?’ is a little too on the nose, aimed as it is at a guy who maintains a locked ‘playroom.’ And Christian’s world is Rich Guy 101, all private air travel, champagne and bespoke suits.” – Sara Stewart, the New York Post.

• “The movie Fifty Shades of Grey is considerably better written than the book. It is also sort of classy-looking, in a generic, TV-ad-for-bath-oil way. Dakota Johnson, who plays the virgin English-literature major Anastasia Steele, and Jamie Dornan, who plays Christian Grey, the wildly rich and sexually … particular business titan who wants Miss Steele in his playroom, are exceedingly attractive actors with enviably supple bodies well suited to nakedness. And really, under the circumstances, movable parts matter more than acting skills.” – Liza Schwarzbaum, Entertainment Weekly

• “It’s a slow build to the smutty bits, and one that’s disappointingly devoid of tension. Even so, the movie is, by definition, a stronger proposition than the book because it strips away the oodles of cringe-inducing descriptions and internal monologue that tip the text heavily toward self-parody.” – Sheri Linden, The Hollywood Reporter.

• “What the film gets spot-on is the essence of E.L. James’s wildly successful stab at Twilight fan fiction: the frisson of excitement when naïve college senior Anastasia Steele (Dakota Johnson) embarks on an affair with wealthy CEO Christian Grey (Jamie Dornan). It’s too bad the movie also imports James’s atrociously written prose and bizarre sexual politics, but then, no one buys a Fifty Shades ticket for the dialogue.” – Alynda Wheat, PEOPLE 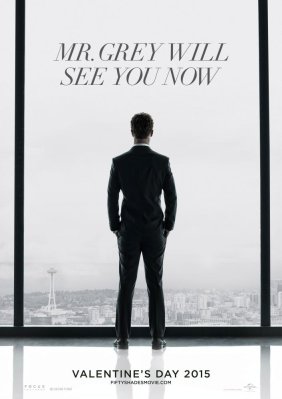 French Teenagers Can Go See Fifty Shades of Grey
Next Up: Editor's Pick