President Barack Obama speaks during a joint press conference with German Chancellor Angela Merkel after a meeting in the East Room of the White House in Washington D.C. on Feb. 9, 2015.
Samuel Corum—Anadolu Agency/Getty Images
By Alex Rogers

One phrase in President Obama’s new request for congressional authority to fight Islamic militants in Syria and Iraq is causing a backlash among Democrats: “enduring offensive ground combat operations.”

“I just think ‘enduring’ is too ambiguous,” says Illinois Sen. Dick Durbin, the Democratic Whip. “’Offensive’ is uncertain. As someone noted, you’re dealing with actions by the Department of Defense, which can always be classified as defensive. So we have some work to do.”

The phrase, according to California Rep. Adam Schiff, the top Democrat on the Intelligence Committee, is meant to signal that President Obama wouldn’t commit the country to another war like the one he campaigned against in 2008.

“It’s another way of saying this won’t be Iraq Part II or Afghanistan all over again,” he says. “Beyond that, it doesn’t tell us very much because what does ‘enduring’ mean? And what does ‘offensive’ mean?”

The word “enduring” is particularly vague in this context: as Bloomberg noted, the 13-year Afghanistan war was named Operation Enduring Freedom. For some Democrats, the phrase in Obama’s authorization for use of military force—known as an AUMF—harkens back to the Vietnam war.

“It’s language that is of concern to me in that it seems oddly open-ended,” says Virginia Rep. Gerry Connolly, a member of the House Foreign Affairs Committee, which will debate the resolution. “As the generation who remembers the Gulf of Tonkin resolution, the lesson learned there is you want tight language when you’re authorizing military intervention.”

“I have no reason to believe this president would ever do that action, but he’s citing language that was passed in his predecessor’s tenure that is 13 years old,” he added. “So we have to be cognizant of the fact that whatever we pass will survive this presidency. Therefore we have to write it in a way that is as tight and focused as we need it to be.”

The Obama Administration has already sent around 2,300 airstrikes against ISIS for the past six months under congressional authority the Bush Administration received in 2001 and 2002 to attack Iraq and the perpetrators of 9/11. But Obama has called ISIS a “different type of enemy” that requires a new legal authority to defeat. The requested authorization is more limited than the ones currently used as it sets a three years “sunset” and repeals the 2002 AUMF, but it doesn’t set a geographical limit to Syria and Iraq as some like Schiff and Kentucky Sen. Rand Paul had hoped.

White House Press Secretary Josh Earnest said Wednesday that the language in the resolution is “intentionally” fuzzy to ensure there aren’t “overly burdensome constraints” on the president as he responds to unexpected events.

Some top Republicans agree, arguing that the president should not be constrained by Congress in fighting Islamic militants, which are responsible for the death of four Americans and control roughly double the size of Massachusetts in Iraq and Syria.

“The reality is that ISIS is a brutal terrorist army that does not respect timelines or boundaries,” said House Homeland Security Committee Chairman Michael McCaul. “The president’s proposal will weaken the authority of the president to defeat ISIS by limiting, not expanding, our ability to rollback and destroy the violent Islamist extremists that threaten our nation. 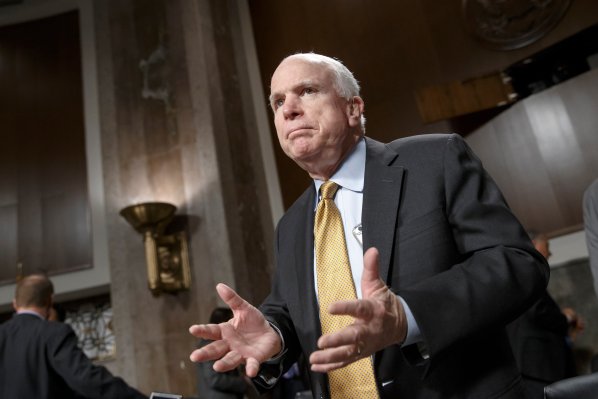