Police charged a North Carolina man Wednesday in the murder of three Muslim students, and amid fears that the victims were targeted because of their religion, authorities said a preliminary investigation indicated that a parking dispute may have led to the shooting.

The shooting occurred about 5 p.m. on Tuesday in a Chapel Hill apartment complex near the University of North Carolina, where police responded to gunfire and found the three victims dead in their apartment. The suspect Craig Stephen Hicks, 46, frequently posted atheist and anti-religious articles and photos on his Facebook page. Police said he turned himself in and has been charged with three counts of first-degree murder.

The victims, each shot in the head, were identified as Deah Shaddy Barakat, 23, and his wife Yusor Abu-Salha, 21, and Abu-Salha’s sister, Razan Abu-Salha, 19, of Raleigh.

Police said Wednesday that a parking dispute appeared to be the cause of the shooting, the New York Times reports, but investigators were still exploring the possibility of an anti-Muslim motive in the “senseless and tragic act.”

“We understand the concerns about the possibility that this was hate-motivated and we will exhaust every lead to determine if that is the case. Our thoughts are with the families and friends of these young people who lost their lives so needlessly,” Chapel Hill Police Chief Chief Chris Blue said.

Hicks’ wife said the slayings were not motivated by religion, the Associated Press reports. “I can say that it is my absolute belief that this incident had nothing up do with religion or the victims’ faith, but in fact was related to long-standing parking disputes my husband had with various neighbors regardless of their race, religion or creed,” Karen Hicks said.

Dr. Mohammad Abu-Salha, the father of the two women victims, said Hicks’ underlying animosity toward Barakat and the Abu-Salha sisters was based on their religion and culture, the Charlotte Observer reports. Abu-Salha, who runs a psychiatry practice in Clayton, said his daughter had complained about Hicks in the past.

“It was execution style, a bullet in every head,” Abu-Salha said Wednesday morning. “This was not a dispute over a parking space; this was a hate crime. This man had picked on my daughter and her husband a couple of times before, and he talked with them with his gun in his belt. And they were uncomfortable with him, but they did not know he would go this far.”

Barakat was a second-year dental student at UNC-Chapel Hill’s School of Dentistry. He was an advocate for global dental health and planned to travel to Turkey this summer to treat Syrian refugee students for urgent dental needs and distribute toothbrushes and toothpaste.

His wife Abu-Salha planned to begin her dental studies at UNC in the fall of this year. She and Barakat were married late last year. Her Facebook page shows her dancing with her father at her wedding. Abu-Salha’s sister, Razan, was studying architecture.

The crime ignited anger on social media over what some believe was a targeted killing, with people using the Twitter hashtag #MuslimLivesMatter.

“Based on the brutal nature of this crime [and] the past anti-religion statements of the alleged perpetrator,” said CAIR’s National Executive Director Nihad Awad, “we urge state and federal law enforcement authorities to quickly address speculation of a possible bias motive in this case.” 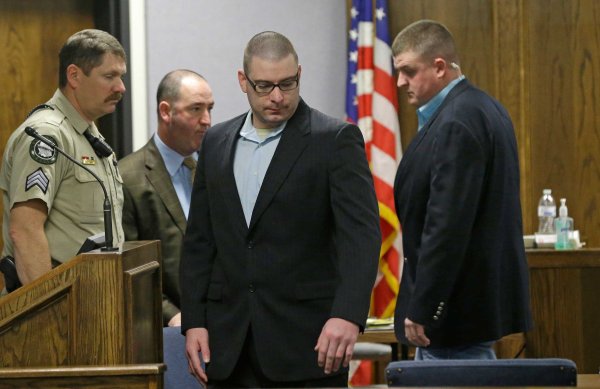 American Sniper Murder Trial Kicks Off in Texas
Next Up: Editor's Pick