Fifty Shades of Grey and How One Sex Act Went Mainstream

In 1976, a survey was distributed to American women through magazines like Cosmopolitan. The questions it asked were personal — very personal — and the answers, compiled in The Hite Report, were a landmark insight into female sexuality. Women were asked to describe their experiences, desires and disappointments. In a 1987 story, TIME praised the report’s author, Shere Hite as “the doyenne of sex polls” and “liberator of the female libido.”

(Read more from TIME’s archive on Shere Hite and her research on sex in America.)

Reading that line, I wondered where that woman is now. Perhaps she’ll be one of the millions of people off to see Fifty Shades of Grey this week: the story of a young woman’s sexual awakening in which said act accounts for some of the tale’s least provocative moments. Advice about it is now a staple of Cosmopolitan today; indeed, today’s readers are told that it’s basically “the kickoff…for sex.”

How did attitudes change, and so quickly? As recently as the 1970s, this was certainly not something that a gentleman would expect. Today, the act is something more like bread before dinner: noteworthy only if it’s absent.

The act is barely depicted or mentioned in mainstream films at all before the 1990s, when the act itself became a well-known activity in the Oval Office. Bill Clinton made famous the notion that fellatio is “not sex”, and 60% of teenagers today agree with him. (The idea that it is “not sex” could go part of the way to explaining why people tend not to use protection for it.) At the time of the Starr Report, Newsweek warned readers that some of the activities described would make readers “want to throw up”, which does suggest that their readers in the 1990s (or at least the editors at Newsweek) were still not of the view that the President’s predilections were “standard.”

Even today, the “everyone’s doing it” attitude that prevails in sex writing is not entirely accurate.

Other research over the last twenty years bears out these ethnic differences. Among college students in the ’90s in Canada, whites were more likely than Asians to participate in oral sex. In the U.S., a national survey in 2002-2003 of women ages 15 to 44, showed that 84.3% of white women had engaged in fellatio at least once, while only 60% of Hispanic women, and 57.4% of black women had. (That’s “ever in your life,” not “regularly.”) That study’s authors found that whiteness correlated highly with practicing oral sex: “White race, age of 20-44 years, being married and having higher numbers of life time ex-partners were related to having ever given oral sex.”

In addition, though the act is much more common than it once was in mainstream films and TV, not every pop-cultural depiction has caught up with the idea that it’s standard. In some cases, it’s still used as shorthand to suggest that the man receiving it is a jerk. He’s an adulterer, a corrupt cop, or from Wall Street. The message to viewers is disregard for these scumbags mixed with (depending on the film) some level of reluctant admiration for this jerk who manages to be on the receiving end. The message is generally less mixed for the woman involved. For her, the transaction is degrading. Even Tony Soprano thought that it was only for a certain type of woman: when asked why he had a mistress, he explained that his wife “kisses my kids with that mouth.”

In the 2013 film Don Jon, which is hilariously honest about casual sex, the main character describes his girlfriend (played by Scarlett Johansson) as too hot to need to give oral sex—as though that were something only unattractive women have to do, to compensate for their other failings. 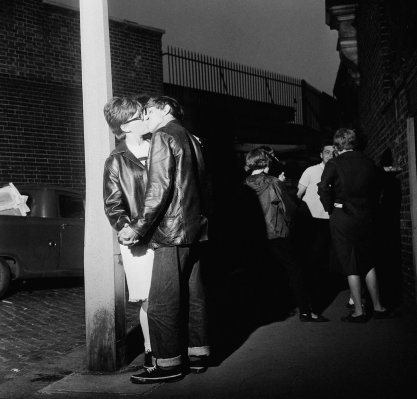 What Every Generation Gets Wrong About Sex
Next Up: Editor's Pick