“Not too much celebrating,” Popovich told reporters afterwards. “I’ve been here a long time and I’ve had good players. That’s the formula. Getting the players is difficult, but I’ve been fortunate to have good ones. The time — that’s the most important element. You have to be around for awhile. It’s more a tribute to [the players] obviously than any coaches.”

Popovich’s reign of coaching excellence is unmatched when it comes to longevity and consistency. He has served as the head coach of the Spurs since 1996-97, making him the NBA’s longest-tenured active coach, and he joins Utah’s Sloan as the only two coaches to win 1,000 games with a single franchise. From the start of the 1996-97 season through Sunday’s action, the Spurs’ winning percentage of .677 is by far the highest, easily outpacing the Lakers (.621), Mavericks (.597), Heat (.581) and Suns (.569).

The only coach with at least 1,000 wins who has a better career winning percentage than Popovich is Jackson, who coached Michael Jordan’s Bulls and the Shaquille O’Neal/Kobe Bryant Lakers.

The list of notable players who took the court on Popovich’s teams is a long one indeed. In addition to Hall of Famer center David Robinson, Popovich has guided future Hall of Famers Tim Duncan, Manu Ginobili and Tony Parker, and the likes of Sean Elliott, Avery Johnson, Bruce Bowen, Robert Horry and Kawhi Leonard.

The 66-year-old Popovich — known for his dry, sarcastic wit and impatience during in-game interviews — began his coaching career as an assistant at the Air Force in 1973. He coached at Division III Pomona-Pitzer college from 1979 until 1987 before joining the Spurs in 1992 as an assistant under Larry Brown. 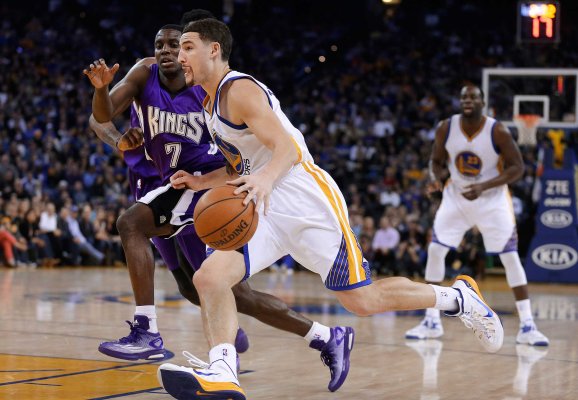 Watch: The Warriors' Klay Thompson Had the Best Quarter of All Time
Next Up: Editor's Pick