Indonesian maid Erwiana Sulistyaningsih, center, accompanied by her supporters, walks out from a court in Hong Kong on Feb. 10, 2015
Kin Cheung—AP
By Kevin McSpadden

A 44-year-old Hong Kong woman and mother of two was found guilty Tuesday of criminally abusing her Indonesian domestic helper, Erwiana Sulistyaningsih, whom she beat, refused to pay and even starved.

The case, tried in a Hong Kong court, has drawn global attention to plight of women from countries such as Indonesia and the Philippines, who leave home to work as domestics in other countries but are often vulnerable to abuse at the hands of unscrupulous employers.

Judge Amanda Woodcock described Erwiana as a “prisoner” of employer Law Wan-tung, who sent her home after eight months, emaciated, scarred and barely able to walk, and who threatened to have Erwiana’s family killed if she ever reported the abuse.

The 24-year-old Erwiana was listed in the TIME 100 in 2014 for her decision to speak up. The court heard that during her employment Law punched her so hard that her teeth fractured, shoved a vacuum-cleaner tube down her mouth and denied her food until she was forced to knock on a neighbor’s door at 2:30 a.m. to beg for help. Erwiana also never received a paycheck from Law.

“To employers in Hong Kong, I hope they will start treating migrant domestic workers as workers and human beings and stop treating us as slaves,” Erwiana said in a written statement after the verdict. “Because as human beings, we all have equal rights.”

If given the highest possible sentence, Law could receive up to seven years in prison, according to Detective Superintendent David Cameron of the Hong Kong police.

“The message is if you live in a society that can afford domestic helpers, they are still protected by the law and even if there are cultural differences they are still treated equally,” Cameron said.

Sentencing will be on Feb. 27. 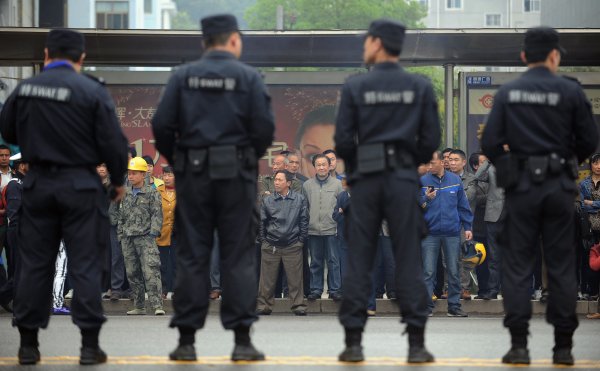 5 Things to Know About China's Execution of Business Tycoon Liu Han
Next Up: Editor's Pick