Obama: It's Time for Iran to Decide on Nuclear Weapons

From Left: Chancellor of Germany Angela Merkel and President Barack Obama hold a joint news conference in the East Room of the White House in Washington D.C. on Feb. 9, 2015.
Michael Reynolds—EPA
By Maya Rhodan

President Obama said Monday that Iran needs to decide whether it will agree to end its nuclear weapons research.

In a joint press conference with German Chancellor Angela Merkel at the White House, Obama said he does not see much chance for an extension of the upcoming deadline on negotiations with the U.S. and several other countries, arguing that the issue is now whether Iran has the political will to get a deal done.

“We are at a point where they need to make a decision,” he said.

Obama noted that the six countries negotiating with Iran—the U.S., Russia, China, Great Britain, France and Germany—have already offered to allow Iran to continue using nuclear power but not nuclear weapons. His view on the deadline echoed similarly strong language made by Secretary of State John Kerry in an interview with NBC’s Meet the Press over the weekend.

“If we’re not able to make the fundamental decisions that have to be made over the course of the next weeks, literally, I think it would be impossible to extend,” Kerry said.

Obama also addressed concerns over Israeli Prime Minister Benjamin Netanyahu’s impending speech before a joint session of Congress, during which he is set to urge more sanctions be placed on Iran. On Monday, Obama said the the relationship between the two countries remains strong, though he and the Prime Minister two have strong differences in opinion when it comes to Iran.

“It does not make sense to sour negotiations a month or two before they’re about to be completed,” Obama said. “What’s the rush, unless your view is that it’s not possible to get a deal.”

Obama and Merkel spoke ahead of a working lunch between the two leaders and following a morning meaning where issues of ISIS and Russian aggression took center stage. Obama said Monday that he has not yet come to a decision on sending lethal aid to Ukrainian fighters, though he asked his team to “look at all the option” if a diplomatic solution cannot be reached..

Merkel reiterated Monday that she is against aiding Ukraine with lethal weapons, but noted the relationship between the two countries would remain strong regardless. The two countries hope to remain united in their efforts to confront extremism, Russian aggression and other global challenges.

“No matter what we decide, the alliance between US and Europe will continue to stand even though on some issues we don’t always agree,” Merkel said Monday. “It’s a partnership that has stood the test of time.” 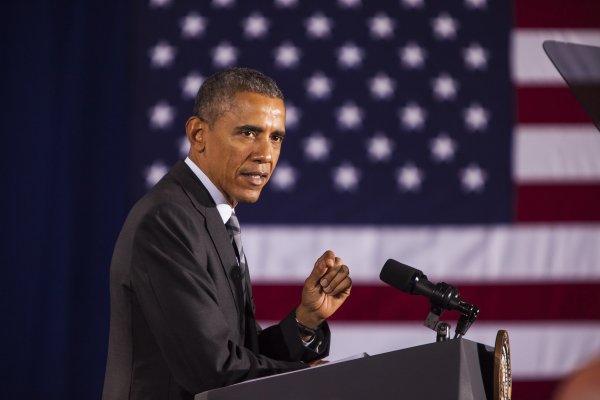 Obama Criticizes the Filibuster, Just as Democrats Start Using It
Next Up: Editor's Pick