Chief Justice Roy Moore of the Alabama Supreme Court addresses a Pro-Life Mississippi and a Pastors for Life pastors luncheon in Jackson, Miss., Friday, Jan. 17, 2014. Moore told the attendees that he cannot separate his faith from his job as chief justice and continues to oppose abortion and same-sex marriage.
Rogelio V. Solis—AP
By Josh Sanburn

On Sunday, Alabama Supreme Court Chief Justice Roy Moore told the state’s probate judges not to issue marriage licenses to gay couples, an order defying a ruling last month by a federal judge that the state’s ban on same-sex marriage was unconstitutional.

A state judge refusing to follow federal orders is rare. But for Moore, it would’ve been more unusual if he went along with the decision quietly.

Judge Moore is often known as the “Ten Commandments Judge.” When Moore, a devout Christian who often relies on Biblical scripture in his rulings, began his judicial career as an Alabama circuit court judge in the 1990s, he placed a Ten Commandments tablet he had carved himself behind his courtroom bench and began instituting prayer before jury selection.

Soon enough, the American Civil Liberties Union sued Moore for violating the Constitution’s Establishment Clause in the First Amendment. In 1996, a Montgomery County circuit judge ruled that prayer in the courtroom was unconstitutional and later ordered that the Ten Commandments display either be removed or placed alongside secular documents like the Bill of Rights and the Constitution. To that, Moore responded: “I will not surround the Ten Commandments with other items to secularize them. That’s putting man above God.”

In 2001, Moore again made national news when he issued an opinion in the case D.H. vs. H.H., a custody battle between a lesbian and her ex-husband who she said was abusive. In his concurring opinion, Judge Moore ruled for the ex-husband, saying that the woman’s sexual orientation was grounds enough to prevent her from taking custody of the children.

A year later, Moore resurrected the Ten Commandments debate when he had a 5,200-lb. granite Ten Commandments monument commissioned and placed inside the Alabama State Judicial Building. Two lawsuits were filed, and by August 2003, a federal judge ordered the monument removed. Again, Moore refused, forcing his fellow justices to remove it instead and sparking thousands of protesters to rally in support of Moore outside the state judicial building. But they weren’t able to save his job. Later that year, a state judicial panel removed Moore from his post as chief justice.

In the years following, Moore unsuccessfully ran for Alabama governor twice and in 2012 was re-elected chief justice of Alabama’s Supreme Court. “I have no doubt this is a vindication,” Moore said after his election. “Go home with the knowledge that we are going to stand for the acknowledgment of God.”

Moore’s latest tenure has been relatively quiet until this week. His latest attempts to ignore federal orders and block the state from handing out marriage licenses to gay couples, while extraordinary for other justices, is natural for a judge with a history of judicial defiance. But this time, Moore appears to be experiencing the kind of resistance he’s sown for years.

On Monday, the U.S. Supreme Court announced that it would allow same-sex marriages to move forward, and most judges appeared to be following suit — defying a state judge who has made judicial disobedience his defining characteristic. 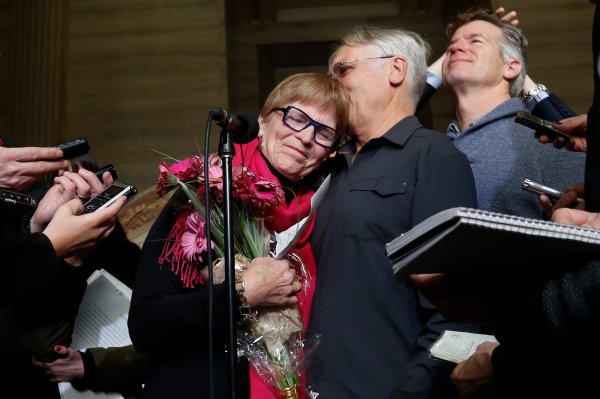 How Canada's Right-to-Die Ruling Could Influence the U.S.
Next Up: Editor's Pick