Kanye West's Escapades Stole the Show at the Grammys

Last night could have been a great night for Kanye West. The rapper, who hadn’t performed at the Grammy Awards in six years, was scheduled to be in the spotlight twice over the course of the show, with performances of his new songs “Only One” and “FourFiveSeconds.” The latter is a rising hit performed with Paul McCartney and Rihanna, while the former, a ballad about his experience of fatherhood, instructs the listener: “You’re not perfect, but you’re not your mistakes.”

West, though, made his own spotlight several more times over the course of the evening. Most notably, during the presentation of the Album of the Year trophy, West went up to the microphone as though to interrupt winner Beck. The rapper’s reputation has never fully recovered from the 2009 incident in which he interrupted Taylor Swift at the Video Music Awards; Swift, like Beck, had beaten West’s friend Beyoncé. This seemed a bit more like a play on West’s reputation than a moment of genuine anger — West cracked a small smile as he walked up to Beck’s microphone, then wordlessly returned to his seat — but the rapper made it clear at other moments he was unhappy with the pageantry of the awards show.

West, for instance, openly mocked red-carpet host Ryan Seacrest in the pre-show, remarking after Seacrest expressed astonishment at West’s multiple interests that “it’s also just called thinking.” And in a post-show interview, West said he was angry about Beyoncé’s loss, noting: “Beck needs to respect artistry. He should have given his award to Beyoncé.”

It’s worth noting, perhaps, that West was nominated for two Grammys last night, and lost them both. But West’s remarks were about more than any one category; they exist within a long context of his speaking out at and about awards shows. West announced in 2005, in the early stages of his career: “If I don’t win Album of the Year, I’m really gonna have a problem with that.” He has still never won in that category, nor has he — as he pointed out in a speech after his acclaimed album Yeezus missed out on top nominations — won in a category against a white artist. (That pattern continued last night; one of West’s two losses was to Eminem.)

West’s apparent faith in the power and meaning of awards ceremonies is beautiful. He seems to cares about the approval of the Grammys, for himself and for other artists he respects, more than anyone else in the Staples Center. (Most of the speeches we saw were fairly tossed-off; Beyoncé herself, winning an award for “Drunk in Love,” seemed less than blown away.) Because the Grammys tend to honor rock instead of rap or R&B in their most important categories, West has had many opportunities over time to see his belief in the integrity of awards shows run up against the reality that not everyone agrees with him, or that the Grammys are set up to honor fairly safe music rather than the spiky, more innovative Beyoncé or Yeezus.

If he or his friends are not going to win the top awards, at least West can win the evening. West, who was nominated for two awards in second-tier categories, is the most talked-about star of the ceremony; no one, least of all the good-humored Beck, is actually upset with him. Even Swift, whose own awards-ceremony moment was interrupted by West six years ago, posed for pictures with West in the audience. It was proof positive that West’s protesting the Grammys are, by now, as much a part of the awards ceremony as the awards themselves. 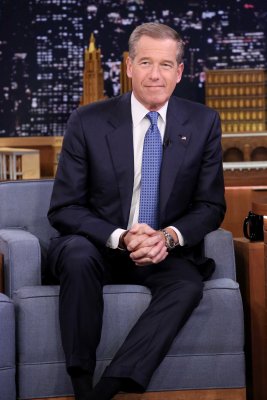 Why NBC News and Brian Williams Need to Open Up, Now
Next Up: Editor's Pick