The U.S. 'Goldilocks' Strategy Toward ISIS

F-16 fighters from the United Arab Emirates arrived at an air base in Jordan over the weekend, ready to attack ISIS targets.
Petra Petra / Reuters
By Mark Thompson

President Obama is tiptoeing carefully through the minefield that is the Islamic State of Iraq and Greater Syria. So far, he has been surefooted, if tentative. But one false step could mortally wound the final two years of his time in office.

He knows it, the Pentagon knows it—and you can bet that ISIS knows it. The challenge is to make sure the American public knows it, if ISIS becomes even more depraved (which is admittedly hard to believe).

Last week featured ISIS’s brutality on display, first with the release of a video purporting to show the murder by fire of Jordanian 1st Lt. Moaz al-Kasasbeh, and then with the claim that U.S. hostage Kayla Mueller had been killed by Jordanian bombs dropped by Amman’s F-16s in retaliation for the Jordanian F-16 pilot’s killing.

Jordan has stepped up its bombing of ISIS targets since the militants killed the pilot, reporting 56 air raids in three days. The United Arab Emirates, which had suspended its air strikes following al-Kasasbeh’s capture, has deployed warplanes to Jordan following his murder. ISIS’s brutality has “galvanized the coalition, unified the coalition,” retired Marine general John Allen, now the Obama Administration’s anti-ISIS chief, told ABC’s This Week on Sunday.

But what if the murdered pilot had been an American?

The anti-ISIS fervor that has gripped Jordan since the video’s release would pale alongside congressional denunciations of Obama’s steady-as-she-goes policy to “degrade and destroy” ISIS. Cable-news commentators would crank up the heat demanding retribution.

As satisfying as such rants might be, they play into ISIS’s hands. “If we want to fight terrorism effectively we must realize that nothing the terrorists do can defeat us,” Yuval Noah Harari, a historian at the Hebrew University of Jerusalem, wrote over the weekend in Britain’s Guardian newspaper. “We are the only ones who can defeat ourselves, if we overreact in a misguided way to terrorist provocations.”

That’s the trap ISIS has set for Washington. Given the white-hot rhetoric that Republicans regularly hurl at Obama, it could work. “Too often, what’s missing here in Washington is a sense of perspective,” Susan Rice, the national security adviser, said Friday. The threat ISIS and groups like it pose “are not of the existential nature we confronted during World War II or during the Cold War,” she said. “We cannot afford to be buffeted by alarmism in a nearly instantaneous news cycle.”

Rice said the U.S.-led alliance has “taken out thousands of [ISIS’s] fighters, destroyed nearly 200 oil and gas facilities that fund their terror, and pushed them out of territory, including areas around Baghdad, Sinjar, and the Mosul Dam.”

Obama is pursuing what might be called a “Goldilocks” strategy against ISIS — not too hot, and not too cold. He’s ordered air strikes, which has upset some of his fellow Democrats. But he has refrained from expanding the U.S. role, which has distressed some Republicans. He seems dedicated to the dicey proposition of limiting the U.S. to a supporting player (although it has conducted 81% of the air strikes), and letting Iraqis and Syrians take the lead in the battle on the ground against the barbarians who have seized much of their nations. “We can’t police a region that won’t police itself,” Senator Tim Kaine, D-Va., told CNN Sunday.

In 2001, the Pentagon was fully on board when President George W. Bush decided to invade Afghanistan for the shelter its Taliban government provided al Qaeda, which launched the 9/11 attacks. But U.S. military officers were far more skeptical of the need to invade Iraq two years later.

Now, 12 years after the Iraq invasion, there is an abiding skepticism inside the Pentagon about deeper U.S. involvement in its six-month war against ISIS. Few want it expanded into a third major U.S.-led war in the region. But their leeriness is tempered by not wanting the sacrifice of 4,486 American lives in the 2003 Iraq war to have been wasted. Many of them, of course, weren’t yet alive when Vietnam should have purged that urge for waging war nearly a half-century ago. 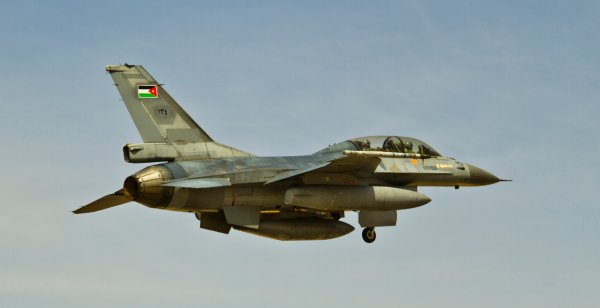 Jordan and the Power of Vengeance
Next Up: Editor's Pick