How You Could Botch a Job Interview Without Saying a Word

It’s great if you’ve prepped for a job interview by rehearsing what you want to say and practicing answers to some questions you expect the interviewer to ask. But all of that could be for naught if your body language makes you seem angry, hostile, nervous or desperate.

Online job board CareerBuilder.com just released a survey about the biggest body language mistakes interviewees make. It’s possible you could be guilty of one or more of these without even realizing it. And that’s unfortunate, because the hiring manager isn’t exactly going to contact you afterwards to say you didn’t get the job because you played with your hair the entire time or your handshake is like a vise.

The more than 2,100 hiring managers who responded to CareerBuilder’s survey say that a lack of eye contact is the most common problem, with roughly two-thirds saying they have seen job applicants do this. “An interviewer might read a lack of eye contact as a sign that you have something to hide,” says Mary Lorenz, CareerBuilder’s senior career advisor.

Just behind poor or nonexistent eye contact is not smiling; more than a third of respondents say they run into this when interviewing candidates. Lorenz says not smiling can be interpreted as a lack of enthusiasm, the exact opposite of what a candidate wants to project. “Not smiling tends to give off the impression that you’re not excited about the job and don’t want to be there,” she says. Along with a lack of eye contact, “They’re not necessarily deal-breakers, but they can send messages that give off a negative vibe,” Lorenz says.

“This is a matter of ‘practice makes perfect,” Lorenz says. “Before going into the interview, practice your handshake with friends or family members, who can give you honest feedback and help you improve your technique.”

Another big issue is fidgeting. A third of CareerBuilder’s survey respondents have had applicants play with an item on their desk, nearly as many run into people who squirm in their seat, and about a quarter encounter hair-twirlers. “A lot of these tics are a result of nervous energy,” Lorenz says. “Breathing exercises, or simply taking a few long, deep breaths before heading into the interview, are simple, but effective in helping calm the nerves.”

Aside from mindful breathing to keep your cool, another good trick is to mimic the interviewer’s posture, behaviors and mannerisms, Lorenz suggests. “Studies have shown that mirroring the person interviewing you… helps to establish a connection with that person, because they subconsciously pick up on these similarities and feel more comfortable with you as a result,” she says. This is also helpful in combating bad posture, another common behavior hiring managers see.

Lorenz’s final recommendation is to practice the physical aspect of the interview. Role-play with a friend or relative with them playing the part of the interviewer. Sit across from them, maybe across a desk or table, in an office or other upright chair. If you don’t have anyone to help you practice, Lorenz says you can practice in front of a mirror. “If you’ve prepared for the interview… you’ll go in feeling more confident and less nervous,” she says, which cuts down on the likelihood that you’ll commit any of these body-language blunders. 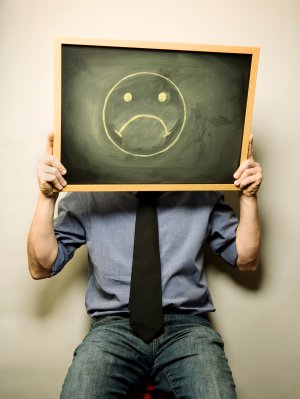 10 Types of People You Should Avoid for Your Personal Sanity
Next Up: Editor's Pick