The Mother Behind the Memoir: Camille Addario on Her Daughter's Career as a War Photographer

“People would say to me: ‘how do you let her do that?'” Camille Addario, the mother of Lynsey Addario, one of today’s preeminent conflict photographers, doesn’t hesitate to answer. “There was no way that I could stop Lynsey from following her passion. It’s like a drive that she has. It’s a calling that’s really extraordinary.”

Choosing a life as a photographer, one that has covered two wars in Iraq and Afghanistan, and was kidnapped twice – in Iraq in 2004 and Libya in 2011, can take its toll. “I know that she suffered putting her loved ones through [the question of] ‘Why am I doing this’, but it’s a passion that just comes out of her being. And, as the mother, I’m so proud of her!”

Lynsey Addario, who just published her memoir It’s What I do: A Photographer’s Life of Love and War, grew up with three other sisters in a very open and communicative family set-up in Westport, Connecticut. Her parents ran a successful hair salon until they divorced and her mother worked independently as a hair dresser. “I gave them the freedom of the creativity to express themselves,” says Camille. “I was so criticized. People would say: ‘Oh my God, this woman is really crazy, she lets them write on the walls.’ I always was considered kind of like a little unconventional as far as the freedom that I gave my girls, but I felt that the values and the love and the self-esteem that I could give them, was the most important gift. Rather than telling them, you can’t do this, you can’t do that…”

But Camille never imagined that her daughter would become a war photographer.

“I remember after 9/11 she called me and she said: ‘Mom, I’m going off to Afghanistan.’ My daughter Lisa said: ‘Don’t make her feel guilty, just encourage her.’ So I said ‘Well go, have a good time’. [I] never imagined that it was going to become her lifelong passion. But she was so enthralled in the people, the history, that she returned several times that year. Lynsey’s greatest gift, is her ability to connect with the person or people that she’s photographing.”

Of course, when the battlefield becomes your daughter’s amphitheater, life can get tough. In 2004, when Lynsey was briefly abducted in Iraq, Camille received a voice mail while driving. It was from Bill Keller, the then-executive editor at the New York Times. She remembers the moment vividly. “I got on the phone, and he said: ‘Miss Addario, I’m sorry to say I have frightening news regarding your daughter Lynsey.’ And I dropped the phone.”

One hour later, the phone rang again and it was Lynsey. “She could barely speak, and she said: ‘Mom, I just want you to know that I’m safe and I will call you back.’ That was very traumatic. That was the first time.”

The second time was in Libya in March 2011, when Lynsey went missing alongside her colleagues Anthony Shadid, Stephen Farrell and Tyler Hicks. Camille received a phone call from Hicks’ mother. “I kind of just went into shock,” she says. “And I just broke down. It [then] went from bad to worse. I got a call saying they were captured and they were being brought to prison. I just said: ‘Please God, protect my daughter’.”

“Lynsey always shared everything with me, except the things that she didn’t want me to worry about,” Camille adds. ‘[Sometimes] she would email me and say: ‘Mom, don’t get upset but I have to be fitted for a flack jacket, and I have to get a helmet,’ and I would say why? Lynsey, don’t tell me you’re going, ‘Well I’m going to be embedded, so don’t worry about it.'”

“She always let me know where she was going, but in the kindest most protective way. But I think Lynsey, she did feel kind of protective of me. She was the last one, she was single, and she wanted to make sure that I was safe and I didn’t have to worry about what she was going through.”

“Her communication has always been, I think, coming from her heart. She just wanted to keep me safe and assured me that I shouldn’t worry, that whatever I gave her she was giving back to me. And that again is a wonderful gift.”

When asked what it’s like to read about Lynsey’s life in her new memoir, It’s What I Do: A Photographers Life in Love and War, Camille says: “I’ve read it a hundred times now and I keep rereading it. Sometimes I laugh and sometimes I cry a little”.

Does Lynsey make her mom see the world differently? “Absolutely! It really has opened my eyes to the importance of people realizing that how lucky we are to be free, and to be here… and to see these atrocities all over the world that we don’t have any control over.”

“She doesn’t hold back!”

Lynsey Addario is a photojournalist represented by Getty Images Reportage. Her memoir, It’s What I do: A Photographer’s Life of Love and War, is published by Penguin Press. 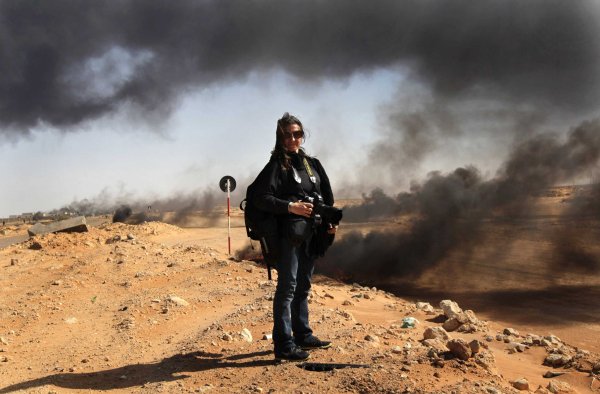 How One Photographer Balances Love and War
Next Up: Editor's Pick