Everything You Need to Know About the 2015 Grammys

If you haven’t been paying attention to music this year but still want to watch the Grammys, airing Feb. 8 at 8 p.m. on CBS, don’t worry — you’re more prepared than you think. You’d have to be a real hermit to have survived 2014 without hearing Iggy Azalea’s “Fancy” blast from a passing car, or Sam Smith’s cherubic falsetto finding your ears in a shopping mall. You might not know what the “bass” is, but you know some girl named Meghan is all about it. You might avoid Taylor Swift whenever possible, but you know the phrase “haters gonna hate” will never land the same. You might not know who this Sia lady is — in fact, she prefers it that way — but your Facebook feed probably hasn’t seen the last of Maddie Ziegler’s mesmerizing moves.

The Grammys call themselves music’s biggest night, if only because the hits being honored are so massive that you couldn’t avoid them if you tried. If that doesn’t inspire confidence in your music knowledge, here’s a guide that will bring you up to speed:

Who that, that do that? Rapper LL Cool J is returning for hosting duties for the fourth year in a row.

Will Missy Elliott make a surprise appearance? Probably not, unfortunately, but you can relive her show-stealing Super Bowl moment here.

Who are the nominees? You can find the full list here, but the artists with the most nods this year are reigning diva Beyoncé, “Happy” hitmaker Pharrell Williams and soulful newcomer Sam Smith, who all had six nominations. That makes Beyoncé the most-nominated woman in the Grammys’ history, with 53 total. Behind them, the following artists all received four nominations: Beck, Drake, Eric Church, Gordon Goodwin, Iggy Azalea, Jack White, Jay Z, Miranda Lambert, Sia, Tom Coyne, Usher.

Who’s performing? Nominees such as song-of-the-summer queen Ariana Grande, the spotlight-averse songwriter Sia and Super Bowl entertainer Katy Perry are set to hit the stage, but the show will also include lots of firsts: Madonna will perform her new single “Living for Love” for the first time; and Rihanna, Kanye West and Paul McCartney will also debut “FourFiveSeconds.” As for other group performances, Beyoncé will join Common and John Legend for the Selma song “Glory,” while Mary J. Blige and Sam Smith will team up for what will likely be their one of their The London Sessions cuts.

What are Grammy Moments? That’s when a relatively new artist performs with a more established artist, or when two artists from very different genres unite for a one-of-a-kind collaboration. The concept is enticing, but as TIME’s Daniel D’Addario writes, the execution makes Grammy Moments “the worst thing about the Grammys.” Yes, Tina Turner and Beyoncé rocked the stage together in 2008, but does anyone really want to see Tom Jones team up with… Jessie J?

What’s the difference between Record of the Year and Song of the Year again? Song of the Year honors songwriting, while Record of the Year refers to the actual recording. A worthy Song of the Year is the kind of track that sounds just as good stripped down and played acoustically as it does in an arena with all the bells and whistles. A worthy Record of the Year is about the quality of the production, engineering and performance. You may not want to sing “Fancy” at a campfire singalong, for example, but you can appreciate the trunk-rattling thump of its opening notes or the catchy way Iggy Azalea spells out “I-G-G-Y.” Overlap between the categories isn’t rare — four songs were nominated for both this year — and neither is having the same track win both in the same year.

Are there any laughable Best New Artist nominations? This category has been easy to make fun of in the past — Imogen Heap was once nominated eight years after her debut — but this year’s contenders are indeed all fairly new. Technically, Iggy Azalea did release her first mixtape in 2011, and technically Bastille did drop a self-released EP that year as well, but that’s not what the category is about. “Our Best New Artist category probably has the most complicated set of rules of any of our categories,” the Recording Academy says on its website. “Essentially, a ‘new artist’ is defined for the Grammy process as any performing artist or established performing group who releases, during the eligibility year, the recording that first establishes the public identity of that artist or established group as a performer.”

What races should I pay attention to? Best Hip-Hop Album is one to watch, as polarizing Aussie emcee Iggy Azalea received a nod for The New Classic. Last year, Macklemore & Ryan Lewis won the award over the likes of Kendrick Lamar and Kanye West, dealing a major blow to the Academy’s hip-hop credibility. This year, the Grammys can either redeem themselves or turn the category into the show’s biggest joke.

But if Azalea does win, she’ll also become the first solo woman to win that category (Lauryn Hill won it with the Fugees in 1997) on a night that could be historic for many other female artists; similarly, Nicki Minaj may become the first female rapper to win the Best Rap Song award with her ode to big butts, “Anaconda.” If Paramore takes home the award for Best Rock Song, Hayley Williams will be the first female recipient of the award since Alanis Morissette in 1999. And if St. Vincent snags Best Alternative Album, she’ll only be the second woman to have done so ever (the last was Sinead O’Connor in 1991, the first year the award was presented).

Though Beyoncé is up for several awards, 2014 was really of the year of the upstarts, thanks to Sam Smith’s ascension, Ariana Grande’s summer hit streak and Meghan Trainor’s retro takeover. Sunday night might make it official: Smith is nominated in four of the most important categories, and given the success of “Stay With Me,” he’s unlikely to leave the Staples Center without a little bling; Trainor is up for both Song of the Year and Record of the Year; and Grande is up for Best Pop Vocal Album and Best Pop Duo/Group Performance with “Bang Bang.” That song, along with Grande’s “Break Free” and “Problem,” also helped Swedish mega-producer Max Martin earn his first non-classical Producer of the Year award, even though he’s been delivering No. 1 singles for the past fifteen years.

Correction: The original version of this story misstated the date of the 2015 Grammys award show. It’s on Feb. 8. 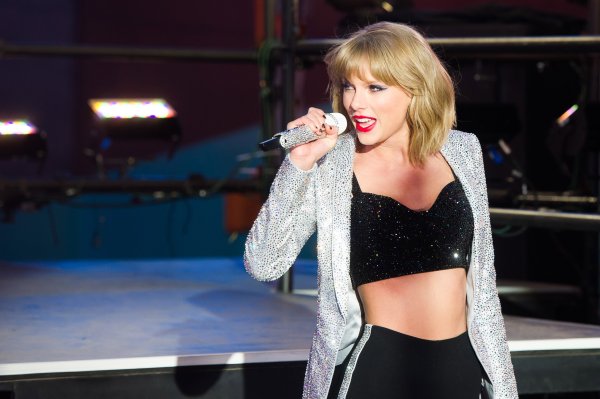 Here's Who Twitter Thinks Will Win the Grammys
Next Up: Editor's Pick