Hours after Thursday’s annual National Prayer Breakfast, His Holiness the Dalai Lama met with a much smaller, and far less publicized, religious gathering in Washington, D.C.

Around a hundred American Muslims and American Buddhists gathered in the lower level of Park Hyatt Washington to hear His Holiness speak about the concept of service with Sheikh Fadhil al-Sahlani, representative of His Eminence the Grand Ayatollah Sayyid Ali al-Sistani. Richard Gere, of Pretty Woman fame and a practicing Buddhist, showed up and sat in the front row.

His Holiness began by discussing the challenges that many Muslims have faced since the Sept. 11 attacks. A few individuals’ behavior he said, should not generalize the entire religious tradition — “It’s not fair, not right” — and added that he was concerned about the bad image Islam was getting. It is a service, he explained, for Muslims to stand up and not be complacent or indifferent in this environment, especially when Islam has such global significance. Muslim faith is about loving everyone, he said. “Muslim practitioners must extend love toward entire creation of Allah,” he said. The audience interrupted in applause.

The Dalai Lama also shared an interaction he once had with President George W. Bush after the 9/11 attacks. On a human level, His Holiness said, Bush was a very nice person. “‘I love you,’” the Dalai Lama recalled saying to Bush, “‘but some of your policies, I have great reservation [about].’”

The event was hosted by the Development Organization for Societies in Transition (DOST), a Washington, D.C., secular nonprofit started by Muslims that does civic programming in northern Pakistan, and sponsored by the Universal Muslim Association of America. The panel, moderated by DOST executive director John Pinna, was the second in the group’s ongoing series of conversations between the Muslim community and His Holiness. The first was an informal gathering with two dozen American Muslim leaders and the Dalai Lama two years ago. American Muslim leaders, including Islamic Relief USA CEO Anwar Khan, U.S. Institute for Peace vice president Manal Omar and Muflehun executive director Humera Khan, joined His Holiness and His Eminence for a panel conversation on the idea of service.

Al-Sahlani added, “The greatest victim of the terror of the last 20 years was the religion of Islam.” It is time, he said, for Muslims to fix their own house. The Dalai Lama nodded.

His Holiness made two practical suggestions about action steps moving forward. He suggested that a similar meeting take place in an Arab country, perhaps Jordan, for Muslims to talk about practical ways of making this happen. It is difficult, he explained, for the perspective of American Muslims to reach Muslims in other parts of the world where extremism is more of a daily reality. He also floated the idea of one day holding a demonstration in front of a major media organization to ask them to report positive events and not just negative ones, especially about Islam.

Neither his Holiness nor His Eminence addressed the recent attacks in Paris at the Charlie Hebdo headquarters. The Dalai Lama closed the event by contracting violence and truth. The power of violence, he explained is immediately clear and decisive. The power of truth, however, becomes more obvious as time passes.

Correction: An earlier version of this story incorrectly identified the sponsor of the meeting. 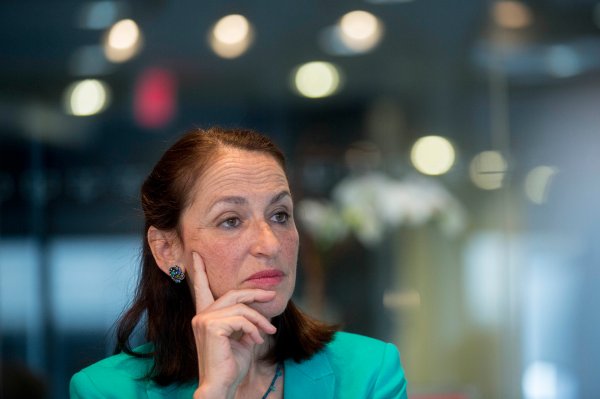 The Head of the FDA is Leaving. Here's Why That's a Big Deal.
Next Up: Editor's Pick