When big award shows announce their nominees, they often make celebrities wake up early and read off lists of names. Ed Sheeran and Pharrell did some of that for Grammys, announcing four of the big categories on morning television last December. But after that, the Grammys did something unprecedented, and arguably hipper: they announced the rest of the nominees on Twitter, which then rounded up the stars’ reactions. So when it comes to predicting which artists will take home trophies, it makes sense to look for clues where much of the chatter is taking place: Twitter.

The social media giant has analyzed the most-tweeted about artists and songs since the nominations were announced late last year. And while Twitter buzz isn’t a guarantee of award show success, the results, debuting on TIME and Twitter today, suggest Taylor Swift, Beyoncé, Nicki Minaj and Paramore have a shot at winning big this Sunday.

How it might go down: Swift, Smith, Sia and Trainor are nominated for both Song of the Year and Record of the Year, and taking home both trophies isn’t entirely out of the question — Adele did it in 2012 when “Rolling in the Deep” was rolling in awards. The Grammys have given props to Swift’s songwriting many times — she’s the youngest artist to ever win Album of the Year — but don’t be surprised if the show favors one of the less-tweeted nominees with a more soaring chorus over the catchy-but-repetitive frontrunners.

How it might go down: Beyoncé is currently the most-nominated woman in the awards show’s history, and she’s already won this category three times with “Single Ladies,” “Crazy in Love” and Destiny’s Child “Say My Name.” But Usher’s “Good Kisser” might be more in line with the Grammys’ tastes, as soulful dudes (including Miguel, Justin Timberlake, John Legend and Cee Lo) have taken the prize the past four years.

How it might go down: The category is barely a decade old, but since 2004, it’s been largely dominated by West, who’s won six times. Nicki Minaj, however, would be the first female rapper to win the award, and Grammy guilt over Lamar — whose loss to Macklemore last year puzzled even Macklemore — could work to his karmic advantage.

How it might go down: If Paramore wins, frontwoman Hayley Williams will be shaking up a typically male-dominated category — the last female artist to win here was Alanis Morisette in 1999. History, however, favors the Black Keys and Jack White, repeat Grammy winners who have taken home this trophy before in particular. Ryan Adams has been nominated several times, but never won, and Beck’s wins have tended to be awards for vocal performance, rather than songwriting. 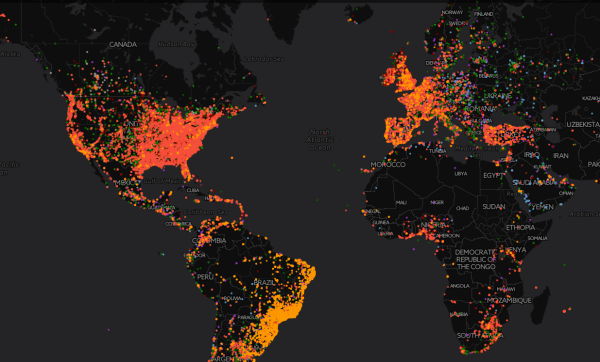 This Map Shows Which Music Genres Are Most Popular Around the World
Next Up: Editor's Pick