The Acquired Taste of Fresh Off the Boat

Acquired Taste: Eddie Huang readies viewers, and himself, for the sitcom version of his life.
Adam Krause for TIME
By Nolan Feeney

Eddie Huang used to hate being Chinese. Growing up in Orlando, he once begged his Taiwan-born mother for “white-people food” after classmates pinched their noses and mocked his lunches. When he arrived with Kid Cuisine, a student in the microwave line threw him to the ground and called him a racial slur. After that, Huang gave up on fitting in. He vowed to always fight back.

Huang, 32, has since spent much of his zigzag career trying to do two things: subvert stereotypes about Chinese-American men and examine the alienation of his youth. As a producer of Fresh Off the Boat, ABC’s new adaptation of his best-selling memoir of the same name, Huang has his biggest platform yet. The journey there hasn’t been without a few more fights, but Fresh Off the Boat is still groundbreaking. It not only gives Chinese Americans historic visibility on TV as the first Asian-American family sitcom in 20 years, but it also tackles race head-on.

Huang’s path to television was unconventional. While working as a corporate lawyer, the devoted hip-hop fan ran a streetwear business and sold weed on the side. When he was laid off from his legal job, he pursued stand-up comedy, auditioning for the Food Network’s Ultimate Recipe Showdown to boost his profile. Chefs praised his cooking on the show, and Huang came to see food as a “petri dish” for a larger conversation. “History, politics, economics–anytime things shift, you can see it in a plate,” he says. “I saw an opportunity to create a platform [where] people listen to the things I had to say about race.”

In 2009 he launched two ventures that would bring him fame–Baohaus, a Manhattan pork-bun eatery that drew rave reviews; and the blog Fresh Off the Boat, where he mused about racial identity and pop culture. Making buns at night and blog posts by day, he set out to become a voice for Asian Americans. He became a food personality along the way: Baohaus’ success led to hosting gigs for Vice, MTV and the Cooking Channel. In 2010, Huang opened a second restaurant, Xiao Ye, but it closed after poor reviews and liquor-license troubles. He published his memoir in 2013, and producers quickly came calling–not for his kitchen skills but for his life story.

When they began to adapt his book into a sitcom, there was little to model it on. Margaret Cho’s All-American Girl had been canceled in 1995 amid great turmoil over its portrayal of Korean Americans. At different times, Cho says, she was told she was too Asian, not Asian enough and too fat to play a character based on herself. (Pressured to lose weight, she began an extreme diet that caused kidney failure.) The network wanted an “authentic” Korean-American family, even when that notion contradicted her experience. Huang similarly couldn’t identify with his 11-year-old TV self, played by Hudson Yang, because the show ignored crucial moments from his memoir in favor of what he calls “reverse yellowface”–the telling of white-culture stories with Asian-American actors. “I encouraged Eddie to stand by his guns,” Cho says. “He is far more prepared to take all that on than I was. He has a very strong sense of self, identity and brand.”

Standing up for himself has taken a personal toll on Huang. “You’re catching me on a day when it’s really hard to be Captain Asian America,” he says. Yet it resulted in some victories. He led a successful Twitter campaign to change the show’s previous name, Far East Orlando, even though fresh off the boat is often used as a derogatory term for recent immigrants. The lunchroom confrontation–which makes a jarring appearance, slur and all, in the series’ otherwise lighthearted pilot–was also included from the get-go. “You get hit with this thing people of color live with every day, whether it’s verbalized or not,” executive producer Nahnatchka Khan says. “To not include that would not have done justice to these characters.”

Huang was less successful on other fronts. He thinks the father and mother characters are emasculated and exoticized, respectively, and he objects to the show’s hiring dialect coaches to refine accents he feels do not resemble those of his parents. Constance Wu, who plays his mother Jessica and studied video footage of her real-life counterpart, says the show’s writers–half of whom are minorities, a rarity in sitcoms–aren’t going for cheap laughs. “To anybody who accuses us of utilizing stereotypes, I would challenge them to point out when they’re used as humor tools, because they’re not,” Wu says. In one episode, Jessica’s neighbors explain the Daytona 500 to her bewilderment–what fun is watching cars drive around in circles?–but the punch line isn’t her confusion. Instead, the joke suggests to viewers that what seems foreign might not be any stranger than the familiar, if they’re willing to look closely.

Huang hopes viewers will take the show up on that offer. “Do you know how many people come to Baohaus [asking], ‘What is authentic Chinese food?'” he says. “I’m more than happy to help. That’s the thing that’s beautiful about America–for the most part, people are curious.” 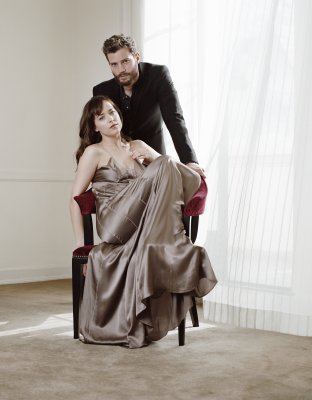 How Do You Solve a Problem Like Christian Grey?
Next Up: Editor's Pick