Supporters and family members of Jordanian pilot Moaz al-Kasasbeh at the tribal gathering chamber in Amman, Jordan, express their anger at his reported killing on Feb. 3, 2015
Raad Adayleh—AP
By Jared Malsin

The video shows a man in an orange jumpsuit who is doused in gasoline in a cage. An ISIS fighter lights a torch and sets fire to the man, who collapses. All previous hostages executed by the group have been beheaded.

Jordan’s government has reportedly scheduled the executions of several jihadist prisoners in response to the killing. One of those reportedly slated for execution is Sajida al-Rishawi, the prisoner ISIS had demanded to be released in exchange for al-Kasasbeh’s release. Al-Rishawi was convicted of attempting to suicide-bomb an Amman hotel in 2005.

“I believe this barbaric act will unite Jordanians against ISIS regardless of their political position in the same way it united them 10 years ago when ISIS bombed three Jordanian hotels and killed more than 60 people,” said Marwan Muasher, Jordan’s former Foreign Minister, in an email.

Regarding the reported plan to execute jihadist prisoners, Muasher said, “I think there will be public pressure to implement the death sentence against them and rather soon.”

The captured pilot’s ordeal has dominated news and public debate in Jordan since he was captured on Dec. 24 after his F-16 fighter jet was shot down during an operation over Syria. Jordan is one of several of Arab nations in the U.S.-led coalition waging a military campaign against ISIS.

In the streets and online, Jordanians expressed both sorrow and anger in reaction to Lieutenant al-Kasasbeh’s death. “I’m really sick to my stomach. This time it hits home,” tweeted Jordanian-American journalist Natasha Tynes. “We lost a brave man today,” said Twitter user @RayaMaraqa, of Amman.

Jordanian King Abdullah II, who was in Washington on Tuesday, decided to cut short his visit and return to Amman, according to Jordan’s official media.

“While the military forces mourn the martyr, they emphasize his blood will not be shed in vain,” said Jordanian military spokesman Mamdouh al-Ameri in a statement broadcast on television. “Our punishment and revenge will be as huge as the loss of the Jordanians.”

Among the Arab states in the military coalition, Jordan finds itself on the front line in the battle against ISIS. Bordering both Iraq and Syria, Jordan is also one of few Middle Eastern countries directly involved in the air campaign against the group. Though ISIS has little support in Jordan, some Jordanians regard the U.S.-led air war as an outsider’s intervention.

“I also do not expect Jordan to pull out of the coalition,” said Muasher. “If anything, it will intensify its involvement.”

The execution video came as a surprise following negotiations between the Jordanian government and ISIS militants, reportedly mediated by intermediaries among key Iraqi tribes. Adding to the confusion regarding ISIS’s motives, indications emerged that Kasasbeh may have been killed earlier in January, long before the release of the video. An activist group called Raqqa Is Being Silently Slaughtered, based in the ISIS-controlled Syrian city of Raqqa, claimed on Twitter on Jan. 9 that he had already been burned to death. If true, the reports would have meant that the ongoing negotiations were meaningless.

Images published online showed crowds of people spilling into the streets of Amman and other cities, rallying in memory of the slain pilot and chanting for al-Rishawi’s execution. “Long live King Abdullah II,” shouted demonstrators at one rally in Amman, according to Twitter user Mark Rafferty. In an attempt to counteract the propaganda effect of the graphic execution video, numerous Jordanians also circulated smiling portraits of al-Kasasbeh. 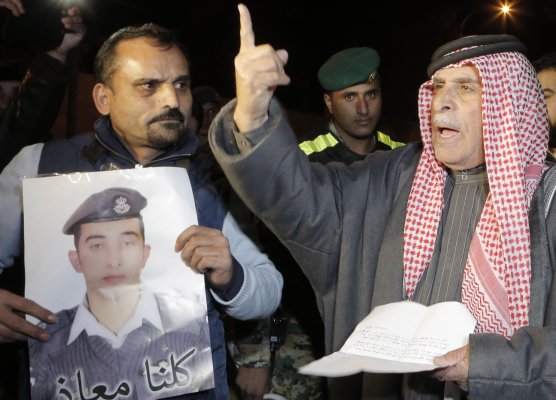