Well, so much for that first-day pop. After pricing at $14 a share on Jan. 22, Box saw it stock rise as much as 77% on its first day of trading. In the six trading days since then, it’s lost more than a quarter of its peak value, closing just above $18 a share on Monday.

The first-day pop is both an honored Wall Street tradition and a sucker’s bet that individual investors keep falling for. Most tech IPOs that start out the gate overvalued yet with momentum behind them are as a rule trading significantly below those initial highs several months later. It only took Box a matter of days, not months.

The success of Box’s IPO isn’t important just for the company’s shareholders, buy for other tech companies – especially those in the enterprise market – planning on going public in coming months. The thing is, the outlook for Box is devilishly hard to predict because it’s a grab bag of challenges and opportunities, of promise and peril alike.

Box is a company growing revenue by 80% a year but it’s lost in aggregate nearly half a billion dollars, mostly on sales and marketing costs to win customers. It has one of the most respected young CEOs in Silicon Valley, influential partners and blue-chip customers but it’s toiling in a market that’s fragmented, changing quickly and growing more competitive by the week.

The bear case on Box is easier to articulate and so it may be gaining the upper hand among investors right now. First there are the losses, shrinking but still substantial. Net loss totaled $129 million in the nine months through October, down from $125 million in the year-ago period.

The hope is that as Box grows, losses will keep declining and eventually disappear as the company pushes into the black. But that may not happen as quickly as some expect. In the most recent quarter, net loss grew by 21% from the previous quarter, nearly double the 10% growth in revenue for the same period.

Then, there’s the valuation. Without profits, defenders point to the price-to-sales ratio but even here Box’s valuation is high. Box’s market value of $2.2 billion is equal to 11 times its revenue over the past 12 months. Even at its $14 a share offering price, Box was priced at 9 times its revenue.

Finally, in a stock market where the most coveted private tech companies are delaying IPOs, Box’s approach to the public market had more than its share of glitches. The company disclosed its IPO plans last March then delayed the offering until this year. Box initially planned to raise $250 million in the offering, then lowered the take to $175 million.

And yet there is reason to think that, if enough goes right for Box in the next year or so, Box could still have a bright future ahead of it. That’s because – unlike IBM, Oracle and other enterprise software giants – Box is well positioned to benefit from the inevitable shift from bloated, aging old business productivity software to an era where content is not just stored securely in the cloud but is created and collaborated there.

One unusual twist about Box’s long journey to its IPO is that, even while people disparaged the company’s worrisome financials, few if any had bad things to say about its CEO. Aaron Levie has a knack for seeing market shifts in advance. He founded Box in 2005 after seeing that online storage was finally ready to take off.

As Box competed with popular startups like Dropbox and, increasingly, with giants like Microsoft, Levie pushed Box away from simple online storage to areas of the enterprise cloud that will grow. Lower costs and stronger security are enticing companies in most industries to conduct more internal communications on the cloud as opposed to local networks that have been vulnerable to outside hackers.

Of course, Dropbox, Microsoft and others are also gunning toward this online-collaboration market. So rather than a generalized service like Office 365, Box is pushing to tailer its offerings to individual industries. In October, it bought MedXT, a startup working to allow sharing of radiology and medical imaging with doctors and patients. Box is also working on other industry-specific software for retail, advertising and entertainment.

To move quickly and reach out to customers in these industries, Box has had to spend more on sales and marketing than it was bringing in in revenue. That meant burning through about $23 million a quarter, which meant tapping public and private markets quickly to finance the sales push.

So Box, as ugly as the financials look now, is also an bet that the company is sitting on the edge of a big shift in the way companies communicate internally and externally -from desktops to mobile, from LANs to the cloud – and can provide a platform that helps them do it privately and securely. That bet is expensive and risky, but the payoff is possible.

That first-day pop was meaningless, as they so often are. Box will need time to prove its mettle, but it may well do so. For now, the uncertainty surrounding its prospects is likely to bring its stock price lower over the coming months. But for investors who are inclined to believe Box can execute on its vision, a cheaper stock may make taking the risk more worthwhile.

Read next: Amazon’s Plan to Buy Old RadioShacks Is a Brilliant Master Stroke—If It Happens 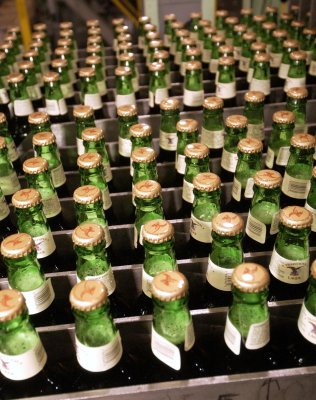 These Are America’s Fastest Growing Beer Brands
Next Up: Editor's Pick