Local luminaries in a suburb of New York City are calling on Hillary Clinton to place her campaign headquarters in White Plains—a small city close to Clinton’s home in Westchester County—despite the draw of the nearby metropolis.

At least one Congresswoman and a major real-estate developer are lobbying Clinton to place her headquarters in Westchester if she runs for president, aiming for the prestige and economic benefits of a large operation. “A Clinton campaign would be good for Westchester, and a Clinton Presidency would be great for America,” said Congresswoman Nita Lowey, the Democratic representative for much of the county. Lowey has encouraged Clinton directly to place her headquarters in the county if she runs.

Half an hour from Manhattan by train, prosaic White Plains is as functional a campaign headquarters as a pair of Crocs and about as chic. A suburb with plentiful office parks, PepsiCo’s headquarters and 50,000 residents, the Democratic-leaning New York satellite is also squarely in Hillary heartland. The Clintons have had a home in Chappaqua, a hamlet 15 minutes away, since 1999, and White Plains is within striking distance of the presumptive candidate’s power base in New York City. Clinton aides hinted last year White Plains is a strong option for a possible headquarters.

But recent lobbying efforts by businesses and local politicians may not be enough to keep Clinton close to home, as the presumptive 2016 candidate reportedly weighs a New York City campaign headquarters. New York is home to a large cadre of Clinton allies and devoted young Democrats that could make up her staff.

Where a candidate decides to locate their headquarters can have an outsized influence on the tenor of a campaign. Obama’s decision in 2007 to base his campaign headquarters in Chicago made him a more credible Beltway outsider and may have kept his campaign grounded by keeping it far from the New York and D.C. media bubbles. Clinton and John McCain, on the other hand, both had headquarters in the D.C. suburbs during the 2008 campaign.

Robert Weisz, the CEO of the largest privately-held property owner in Westchester, said he has reached out to Clinton’s staff, aiming to lease his properties to potential campaign. A Democrat and past Clinton donor, Weisz owns 2.5 million square feet of real estate in the county and plenty of contiguous office space large enough to host a presidential campaign.

During Clinton’s 2008 bid for president, Weisz hosted an 800-person Clinton event on his property on 1133 Westchester Avenue, a commercial space in White Plains. Now he’s among the local real estate firms that are keen on bringing a Clinton campaign to the New York suburb. “We reached out to her staff for several reasons: one to rent space, and one to be helpful to her possible campaign,” Weisz said.

Westchester County Executive Rob Astorino, the Republican nominee in New York’s gubernatorial election last year, said he hasn’t reached out to Clinton directly to ask her to move her headquarters to the county, but that he likely will. “I would love for her to set up shop here,” Astorino said.

White Plains has the advantage of relatively cheap office space, compared to New York City. The current average annual rent price per square foot of office space in White Plains is around $25, compared with around $60 in Manhattan and $30-$35 in Brooklyn, according to a 2013 report. That can add up. President Obama’s 2012 headquarters occupied 50,000 square feet in Chicago’s Prudential building, where rents averaged $22-$25 per square foot annually.

A White Plains headquarters could also attract a more dedicated staff that is willing to regularly commute or live at a distance from the city.

It remains unclear whether local excitement and cheap rent is enough to keep Clinton away from New York City, which has all the pomp, panache and power brokers that White Plains lacks.

The Big Apple’s mayor, Bill de Blasio, ran her first senatorial campaign, and Clinton has connections in Manhattan’s financial industry. According to reports, potential bivouacs for a 2016 campaign include Brooklyn or Queens, where the former Secretary of State would be close to a large base of young Democrats who would form the spine of her campaign staff.

A spokesperson for Clinton didn’t respond to a request for comment.

If the Clinton campaign decides to decamp from Westchester and heads to New York’s outer boroughs, she would likely be courted by a wide array of friendly real estate developers interested in leasing her space.

Bruce Ratner, a prominent Democrat and real estate developer, has extensive Brooklyn properties including the Barclay’s Center, a potential site for the 2016 Democratic National Convention. Stephen L. Green, who is one of New York’s largest office landlords, was a member the so-called Hillraisers, an elite coterie of donors that bundled over $100,000 each for Clinton during her 2008 run.

White Plains notables also argue that accessibility to Westchester County Airport—mere minutes from the suburb— make the New York satellite a better option than the city.

“White Plains would be a terrific location for her campaign headquarters,” White Plains Mayor Tom Roach said. “Of course, we would love to have her headquarters here if she decides to run.” 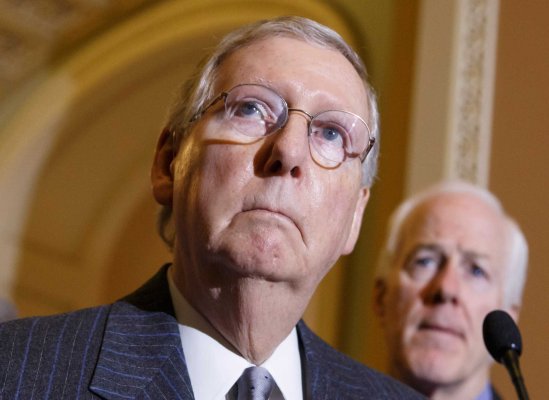