Despite the scientific consensus that vaccines are responsible for wiping out a wide variety of infectious diseases in the U.S., the current measles outbreak has politicians on the left and right weighing in on whether parents should be able to choose whether or not they vaccinate their children. Given the recent statements from a number of possible 2016 election contenders, you would think that vaccines are a widely divisive political issue. But according to data, they’re not.

In 2014, Dan Kahan, the Elizabeth K. Dollard Professor of Law and professor of psychology at Yale Law School, surveyed 2,316 U.S. adults in order to assess public perceptions and attitudes about vaccines. He wanted to know whether the often repeated idea that the public is increasingly fearful of vaccines was true, and whether political parties were really split over vaccines’ risks and benefits. He found the answer was largely no.

Kahan’s data on vaccine-risk perception shows vaccines are one of the most agreed-upon topics regardless of political leaning. Compared with gun ownership, legalizing marijuana and global warming, vaccines are viewed as a generally low-risk by Americans across the political spectrum. And despite the stereotype that upper-class liberals are more likely to scorn vaccines, Kahan’s data, seen in the graph below, shows that people have slightly more negative assessments of vaccines as they become more conservative and identify more with the Republican Party. But the disparities are still really not that notable.

Ultimately, Kahan’s No. 1 finding was this: “There is deep and widespread public consensus, even among groups strongly divided on other issues such as climate change and evolution, that childhood vaccinations make an essential contribution to public health.”

Overall, the people who distrust vaccines and do not vaccinate their children are largely random individuals. Kahan writes:

With over 100 cases in 14 states, however, those outliers can’t be ignored. 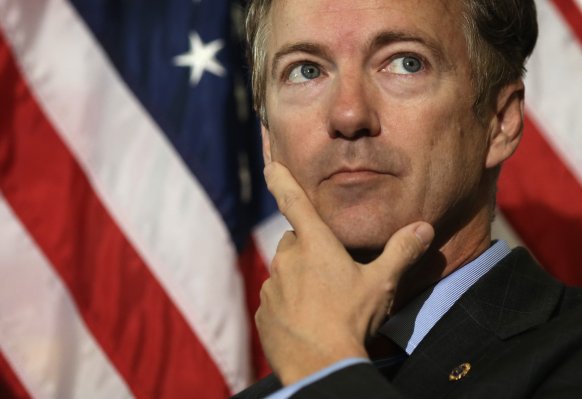 Rand Paul Says Most Vaccinations 'Ought to Be Voluntary'
Next Up: Editor's Pick