LONDON—Reporters were told to expect brief remarks for the press from New Jersey Gov. Chris Christie Tuesday when he emerged from meeting with British Chancellor of the Exchequer George Osborne. And as he emerged from 11 Downing Street—the Chancellor’s official residence—Christie stayed true to his word, but just barely. “We had a lot of fun,” he said, before joining his wife in a waiting car and driving away.

This capped off a bumpy three-day visit to the United Kingdom for Christie, as a perfunctory visit to a stalwart American ally in advance of a presidential run went awry. The “trade mission” featured all the staples of a pre-campaign visit, including meetings with senior government officials and tours designed to complement his agenda at home. Christie also attended a Premier League soccer match, met with Prime Minister David Cameron at 10 Downing Street and visited a pharmaceutical company that makes vaccines in Cambridge.

But a question from a reporter Monday morning on vaccinations after the Cambridge roundtable, in light of an outbreak of measles in the United States, sent the carefully planned trip off the rails.

“I also understand that parents need to have some measure of choice in things as well so that’s the balance that the government has to decide,” Christie said, adding that his own children have been vaccinated. But the line created a furor among Democrats and even some Republicans, who linked his remarks to the views of so-called “vaccine truthers” who believe, despite scientific consensus to the contrary, that vaccines are linked to autism.

A Christie aide tried to clean up the remark in an email to reporters. “The Governor believes vaccines are an important public health protection and with a disease like measles there is no question kids should be vaccinated,” a spokesman said.

Christie’s full remarks show him in line with the broader political thinking on the issues of vaccinations—where mandates vary by state and are usually tied to enrollment in schools or daycare. “I can just tell people from our perspective, Mary Pat and I have had our children vaccinated and we think it’s an important part of making sure we protect their health and the public health,” Christie said. But on an overseas trip, every politicians’ words are parsed with talmudic vigor.

The trip was funded by Choose New Jersey, a state economic development group founded by Christie early in his tenure to recruit businesses to his state, which has also paid for his recent trips to Mexico and Canada, and a 2012 visit to Israel. These politically tinged excursions have helped Christie burnish his foreign policy credentials, even as they have raised questions about transparency.

Overshadowed by the vaccine brouhaha was Christie breaking with established protocol to criticize President Obama on foreign soil. “I think the President has shown over and over again that he’s not the most effective negotiator, whether you’re talking about the Iranian nuclear talks or whether you’re talking about his recent foray into Cuba,” Christie said in response to a question about trade, the Star-Ledger reported. “The president has not proven himself to be the most adept negotiator, in my opinion, on behalf of American interests.”

By Tuesday, Christie was in full damage-control mode. Reporters on the trip had been told to expect two question-and-answer sessions with the governor, the first after attending a “conversation about drug rehabilitation and treatment with action on addiction,” and the second later in the day. Both were scrubbed.

Some foreign travel has long been a prerequisite for presidential candidates, especially governors who lack the average senators’ familiarity with foreign policy issues. But it is frequently not without its pitfalls. In the summer of 2012, Mitt Romney’s overseas trip made him a mockery abroad after he questioned London’s preparedness to host the Olympic Games, and scores of negative headlines at home after an aide shouted an expletive at reporters trying to question him in Poland. 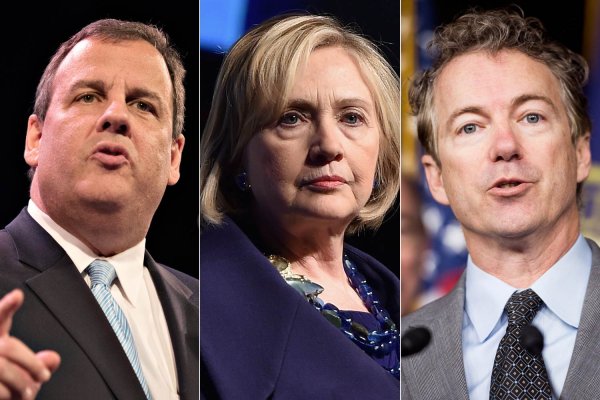