It’s never a good sign when a summer blockbuster starring Mila Kunis and Channing Tatum’s abs is pushed from July to February, a historically bad month for movies. But the move from summer to this inauspicious season convinced some readers long before the critics had filed their reviews that the Andy and Lana Wachowski film is sure to be a flop.

Since the stunning success of The Matrix 15 years ago, the Wachowskis have produced lackluster box office numbers. Both Speed Racer in 2008 and Cloud Atlas in 2012 were critical and commerical disappointments. Now, like Cloud Atlas before it, Jupiter Ascending’s bad reputation precedes it. Reports of its ballooning budget (from $150 to $175 million) and rumors of re-edits after test audiences said they could not understand the plot have plagued the movie in the seven months since it was originally set to hit theaters.

Warner Bros. has attempted to explain away Jupiter Ascending‘s move by pointing to the success of 2013’s Gravity, which also got a delayed release. But Gravity was given a prestigious October release date (where many Oscar-bait films are slated) and eventually won director Alfonso Cuarón an Oscar. Meanwhile, audience members reportedly walked out of a surprise screening of Jupiter Ascending at Sundance last month.

Lana Wachowski offers up a more critical explanation for the move. “The summer is built around familiarity,” she told the Associated Press. “Many cultural critics who shape awareness for films are obsessed with sequels and derivative material. They wildly crave it. That kind of environment is hostile to originality. It only makes space for derivative material and rejects originality. I think Warner Bros. was uncomfortable with that environment.”

It’s true that in a time when most tentpole films are based on a comic book (The Avengers, The Amazing Spider-Man), a fantasy series (The Hobbit, The Hunger Games) or a resuscitated film series (Star Wars, Jurassic Park), the Wachowskis are determined to create something original. That’s a risky bet when even the Tom Cruise vehicle Edge of Tomorrow delivers disappointing numbers.

But while the sci-fi Edge of Tomorrow wowed critics, reviewers don’t seem to be buying Channing Tatum’s half-dog on interstellar roller skates or Eddie Redmayne’s alien-lizard entourage. Perhaps that’s why, for better or worse, the Wachowskis’ next project — a drama about mentally-linked strangers called Sense8 — is an original series for Netflix. 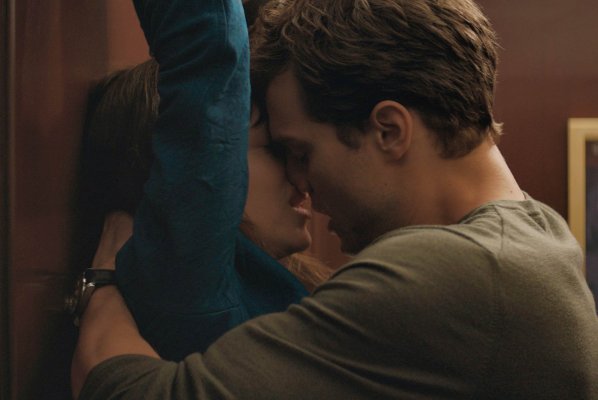 How the Notorious Red Room Was Built in the Fifty Shades of Grey Movie
Next Up: Editor's Pick