Cambodian and international journalists watch a live video feed showing former Khmer Rouge head of state Khieu Samphan during a hearing for his trial at the Extraordinary Chamber in the Courts of Cambodia in Phnom Penh on Jan. 8, 2015
Tang Chhin Sothy—AFP/Getty Images
By David Stout

Khmer Rouge security officials used acid and pliers to torture inmates and disemboweled a detainee and consumed her organs, according to witness testimony given in Phnom Penh this week.

On Monday, former prisoner Keo Chandara told the Extraordinary Chambers in the Courts of Cambodia (ECCC) — a tribunal created to investigate the atrocities committed by the Khmer Rouge — that guards used pliers and acid to torture female detainees incarcerated at the Kraing Tachan security center.

According to his testimony, prison guards at the facility would use the pliers to lacerate the inmates before pouring acid into the wounds. If the detainees passed out due to the excessive pain, the overseers would then use water to revive them.

“About 10 prisoners who were ordered to sit and watch the torture,” said Keo Chandara, reports the Cambodia Daily.

During one particularly gruesome episode, Keo Chandara said the guards hanged one prisoner by a hook through her mouth and then cut out her heart, gall bladder and liver after she was unable to answer questions during an interrogation session.

“One of them asked that the liver be fried and the gall bladder kept for him,” Keo Chandara told the court, according to the broadcaster Voice of America.

The Chinese-backed cadres took the extremities of central planning to new heights during their reign over the kingdom from 1975 to 1979. Cities were evacuated, intellectuals and members of the middle class were executed and currency abolished as the communists launched their ill-fated collectivist reforms that led to mass starvation and wanton savagery.

Approximately 1.7 million people — a quarter of the national population — are believed to have died under Khmer Rouge rule.

Vietnamese forces eventually dislodged the Khmer Rouge from power in 1979; however, guerrilla bands loyal to the outfit continued to battle the central government into the late 1990s.

The ECCC is currently investigating genocide charges against two of the Khmer Rouge’s last surviving top cadres, Khieu Samphan and Nuon Chea, who were sentenced to life in prison for committing crimes against humanity last year. 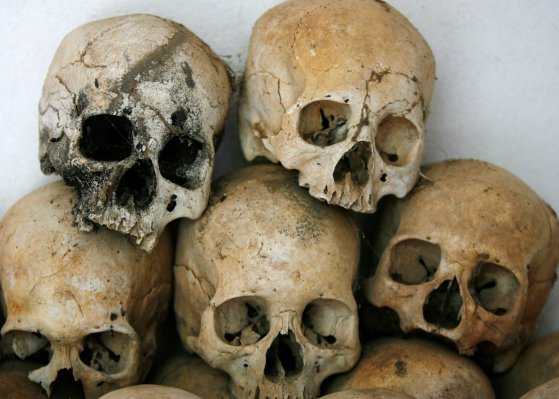 Horrific Testimony at Cambodia's Genocide Trials
Next Up: Editor's Pick