While Katy Perry’s left shark was busy becoming an Internet meme, the palm tree dancers from the singer’s halftime show—students from Arizona State University in real life—took to reddit for an Ask-Me-Anything Q&A. Here are some of their most interesting answers:

1. They weren’t paid.
“I volunteered and I’m not upset that I didn’t get paid. It was a great experience and I got to work with some great people. Definitely worth it. I may have been a little greedy though and tried to keep what I could from the performance.” They were, however, fed “at all but one rehearsal.”

2. Katy Perry had an outfit pit crew.
“There was an entire wardrobe crew dressed in white haz-mat-like [sic] outfits devoted to sprinting on/off the stage and changing her clothes, which were, for the most part, snap-on.”

3. The sharks were Katy’s actual dancers.
The users doing the AMA were part of the Arizona State Marching Band, while others from the props cast were from the Mesa Community College — except the sharks. “The sharks were originally supposed to be dancers from Mesa Community College, but 2-3 days before the performance Katy decided she wanted her own people in costume. The worst part is the MCC dancers had been practicing it for much longer and definitely knew it better at least in my opinion. My friend had a pretty good attitude about it and didn’t let it get to him too much.”

4. They weren’t naked underneath, but…
“We were in unitards with only boxer-briefs or compressions shorts on underneath, so pretty close.” They didn’t get to keep the costumes.

5. They did not get to meet Katy Perry.
“She showed up to our Props Cast rehearsal on Monday and said hi. That’s the closest any of us got to meeting her. She seemed nice, bubbly personality. Also she has the cutest damn dog, it looks like a teddy bear.” 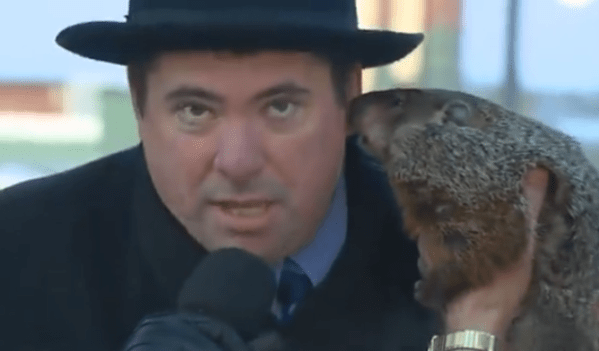 See the Moment When a Groundhog Bit a Mayor's Ear
Next Up: Editor's Pick