Angel and Gerson pose for a portrait in the municipal dump where they work in Tegucigalpa. This image forms part of Dominic Bracco II's Visionary Award project.
Dominic Bracco II
By Olivier Laurent

Five artists have been shortlisted for the inaugural edition of the Visionary Award, organized in memory of the late Tim Hetherington, a photographer and filmmaker who died in a mortar attack in Libya in 2011.

The finalists – Dominic Bracco II, Erika Diettes, Andrew Michael Ellis, Jack Hatton, and the duo of Kel O’Neill and Eline Jongsma – stand a chance to win a $30,000 grant for the production of a body of work that goes beyond the “limitations of conventional media practice.”

Organized by the Tim Hetherington Trust, which was set up to preserve the legacy of Hetherington’s professional life as visual storyteller and human-rights advocate, the Visionary Award’s recipient will be announced later this month.

“The big mistake would be to try and replicate what Tim did,” says Stephen Mayes, the Trust’s director. “What we can do is encourage new thinking; encourage new people to create their own things. We want to nurture new visionaries.”

Bracco, a U.S. and Mexican photojournalist, was selected for his work on the modern American frontier. “Set in the borderlands of Texas, Mexico, and the killing fields of Honduras, this project, The Backs of Men, attempts to break down the physical and societal borders we place around ourselves. The three chapters of this work, composed of photography, video, and theatre, follow reciprocal patterns of violence and poverty and tell the stories of those it displaces,” the Trust said in a statement.

Colombian visual artist Diettes proposed to use the grant to produce an installation that “meditates on the disappeared of Colombia through photography and precious personal object donated by families of the victims.”

Hatton, a U.K. photographer, was selected for his project on the socioeconomic and environmental impact of the oil business in Ghana. His work, composed of portraits and interviews, will be incorporated into a Google Street View-style map.

O’Neill and Jongsma, of the U.S. and the Netherlands, respectively, would use the grant to produce The Ark, an immersive documentary that explores how contemporary conservation tactics reflect Western attitudes toward Africa. “The piece delivers two parallel stories: while armed park rangers in Kenya keep watch over the last surviving herd, scientists in San Diego attempt to ‘de-extinct’ the rhino using stem cell technology,” says the filmmaking team.

Finally, American filmmaker Ellis, who partnered with the New York-based production company MediaStorm, was selected for Fight Hate With Love, a film that explores the incarceration system in the U.S.

“Some of the pieces in the shortlist are ostensibly quite mainstream, but they all have a twist,” says Mayes. “The MediaStorm piece, for example, is a movie, but the process is really different. It’s a mixture of dramatization, actuality. It’s very collaborative with the subject. It’s, in a sense, a mentoring exercise for the subject.”

From the onset, Mayes didn’t want to put constraints on the award. “I didn’t want to limit it to photography or video,” he says. “Tim struggled with all these definitions and, ultimately, considered himself a communicator. This shortlist defines where we want to go in the future and the final award will be the expression of what this is all about.”

The grantee will also receive mentorship throughout the production process, which won’t be limited by time. “Whether it takes a month, a year or two years, we want to facilitate the best possible work,” says Mayes. “We want to add value beyond just cash. I look at Diary, Tim’s autobiographical stream of consciousness piece, as an example. Tim took his documentary videos to a video artist. He didn’t know what would come out of it. He took these two things, shook them up and came up with this utterly inspirational piece that has changed the genre altogether.”

Mayes now hopes that the Visionary Award will foster such career-defining work. “We want to inspire people,” he says. “We want to give somebody who has an original idea or an original way of expressing it, a way to do that.”

The Visionary Award is organized by the Tim Hetherington Trust. 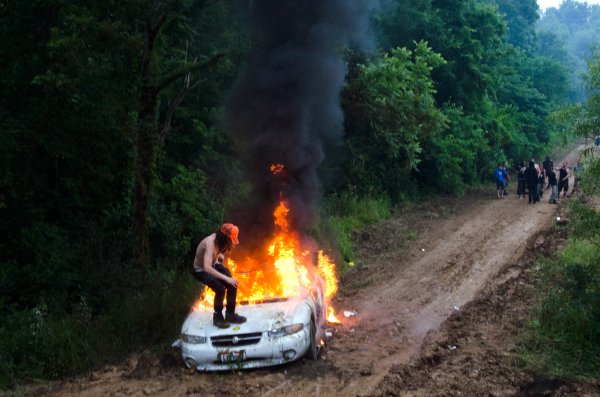 Coming of Age in Skatopia, Ohio's 88-Acre Skatepark
Next Up: Editor's Pick